We were privileged with a visit from my lovable, adorable, stinker-of-a-brother Derek the week before Thanksgiving.  We spent a lot of time together, just hanging out and eating our way through Oakland and San Francisco.  🙂

We made a couple of visits to Fenton’s Creamery in Oakland, a cute ice cream parlor, for some delectable ice cream. 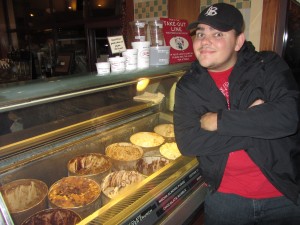 We also discovered this awesome ale house in Oakland called Cato’s that Derek likes to describe as a “classy dive bar”. Even though I couldn’t partake in the beer (boo!) the food more than made up for it. 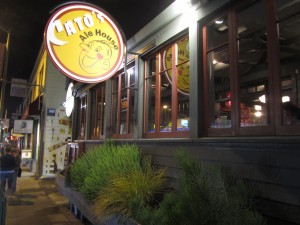 And we spent an evening at Jessie’s pad eating some amazing food and a game night. 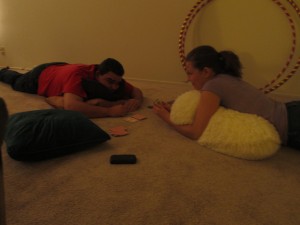 Unfortunately he couldn’t stay for Thanksgiving, but fortunately for us we had another couple of visitors right on his heels: Kevin’s parents, Dorothy and George.  Dorothy flew up a few days ahead of George to spend some time together (and to prepare for the big feast that we were going to make and eat later that week) and it was nice having her around!

One evening that week we drove up to Richmond to visit Point Isabel (where Lola experienced her first open water swim!) so Lola could stretch her legs and so that we could watch the sunset over the SF city skyline.

We were so happy when George arrived from his long drive up from Long Beach and it was doubly nice that Kevin got four days off for the weekend as well!  We spent one of those evenings revisiting Fenton’s Creamery for some ice cream sundae goodness (or, in Kevin’s case, pie). 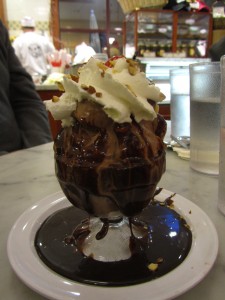 George taking a good, long look at his and Dorothy’s chosen treat 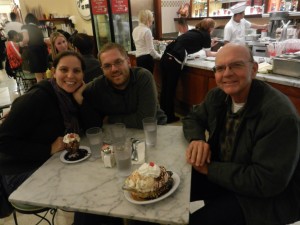 Me, Kevin and George ready to dig in!

This was our third Thanksgiving spent up in the Bay Area (the first was spent with the Julian clan and last year’s was spent with Jessie in San Jose) and it was great having the Edmonds family in town to celebrate.  Dorothy and I got a lot of the work done the day before but we still got an early start on Thanksgiving day to make sure we were ready in time for our other guests (Jessie, Carleigh and Scott) to arrive.  Since Jess and I are vegetarian and Carleigh is vegan we decided to make it a mostly veg-friendly meal.  There were only two things that the vegan of our group couldn’t indulge in: the turkey (obviously) and my Aunt Tina’s infamous corn (made with lots of cream cheese and butter).  But other than that, all of the sides (including one of the pumpkin pies!) were made with no animal products whatsoever!

Kevin and George spent some time working on Kevin’s bike so that they could go mountain biking together later that weekend.

And Dorothy put the finishing touches on the dead bird…I mean, the turkey. The group arrived and were ready to chow down! The group minus George The group minus me

Overall I think it was a pretty successful Thanksgiving meal, especially given that we were cooking for seven in the teeniest kitchen ever!

We had a really busy Friday, starting off with a long hike through Joaquin Miller park (a place Kevin and I have frequented many a time and were excited to share with his parents). 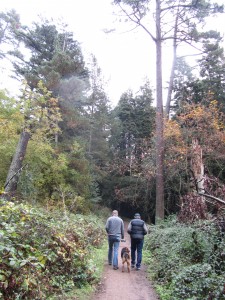 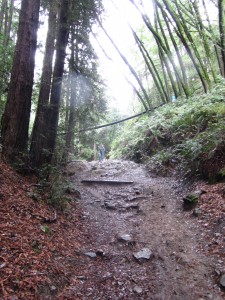 Can you spot Kevin and Lola? 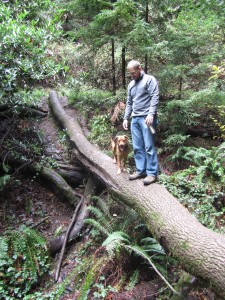 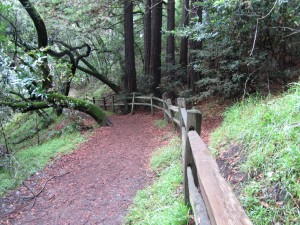 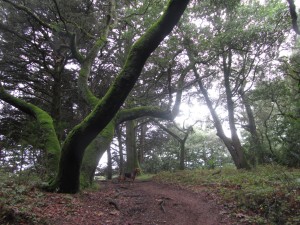 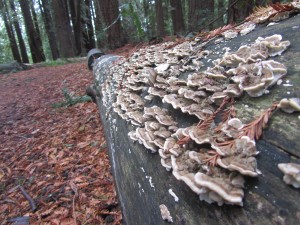 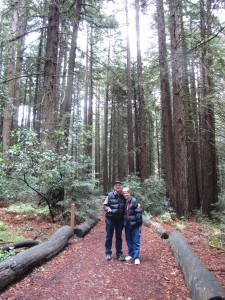 We rushed home so that we could meet with up our favorite friends from Irvine, Alison and Seth!  We hung out at our apartment for a bit (or until Seth’s stomach yelled at us to leave, haha) and then took them to one of our favorite Mexican places, Taqueria Monte Cristo in Berkeley.  It was SO nice seeing them, even if only for a couple of hours! 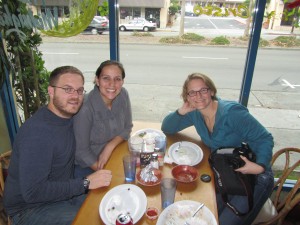 The Redlands gang (minus Seth!)

That night we were off again…to the Christmas tree lighting in Union Square!  Kevin and I had gone in 2009 with the Julians and we knew his parents would enjoy it as well.  I think once every two years is about as much crazy Christmas crowds I can handle.  😉 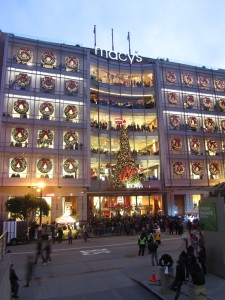 Macy’s all decorated for the holidays 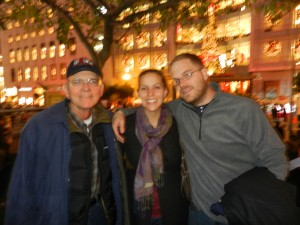 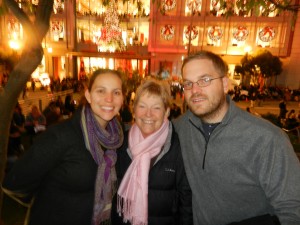 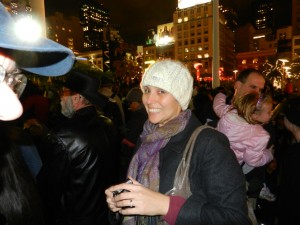 It was surprisingly not as cold as it was two years prior but it still warranted my winter fuzzy hat. 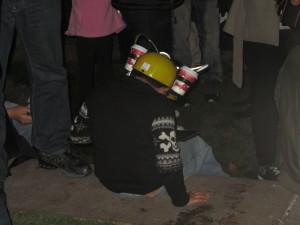 This kid had it made: a helmet with straws feeding into two Starbucks’ hot cocoas! Hahahah! 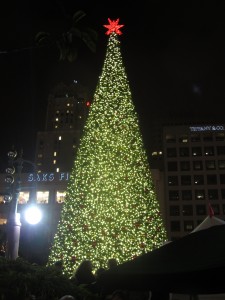 Kevin and George ended the weekend off right by spending a morning mountain biking in Joaquin Miller park with Lola.  I was a bit nervous about Lola going out with them but apparently she kept up pretty good!  Kevin hadn’t gone riding in a looooong time and I’m hoping it becomes more of a habit for him (hint, hint!)  🙂 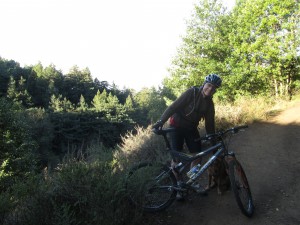 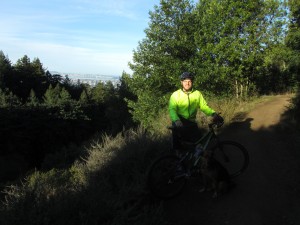 We had a great 10 days full of visitors and we couldn’t have asked for better people to spend the Thanksgiving holiday with!  And now we’re sooo looking forward to Christmas…only 15 more days until we drive down to LB for a week full of family, friends, and food!