That afternoon I set off on a week-long trip down to Long Beach.  Lola and I jumped in the car and made our way down the too familiar 5 freeway.  This time, though, we went a slightly different, more scenic route–we went down the 101 until we hit Gilroy and then took the Pacheco Pass (highway 152) through beautiful winding roads and around the San Luis Reservoir State Recreation Area until we got to the 5.  This was at the suggestion of Carleigh and I’m glad we did it since it made the drive a little more bearable.  🙂

Our only real stop on the trip down was at Casa de Fruta (also at the suggestion of Carleigh) which is a huge compound with a farm, train track, pond, and tons of fruit/nuts/gift shops.  Lola and I walked around a bit and then quickly jumped back on the road. 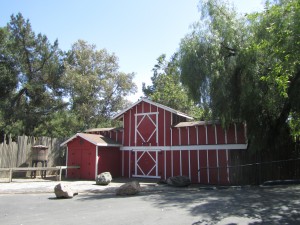 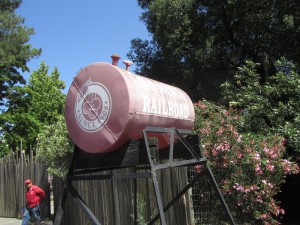 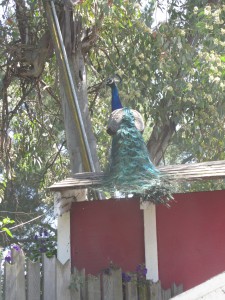 Casa de Fruta peacock (that Lola desperately wanted to get a hold of, haha!) 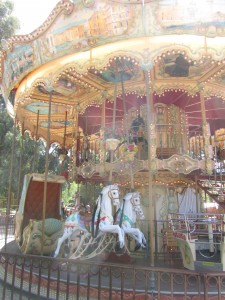 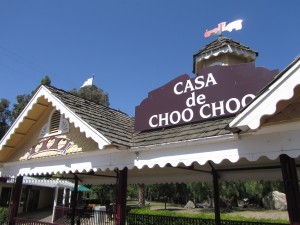 The main reason I went down to Long Beach this weekend was to join my niece’s Girl Scout troop (the one that I used to be a co-leader for) on their trip to Catalina!  I took a ton of photos so I’ll make a separate post for the Catalina trip.  Stay tuned!

As soon as I got off the Catalina Express I was off to my in-law’s house to celebrate Father’s Day with my dad-in-law George and my brother-in-law Thomas (dad to Sophie).  With me to celebrate were my mama-in-law Dorothy, sis-in-law Sarah and her boyfriend Rob, a good family friend Judy and Sophie!  Sarah and Rob had just returned from living in New Orleans and it was so so so good to see them.  And I realized that I hadn’t seen Sophie (my other niece) since Christmas 2009 (1 1/2 years!) so it was a special treat to see her after all this time.  She has grown SO MUCH! 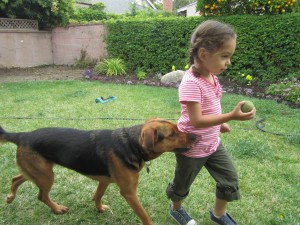 Sophie and her sidekick 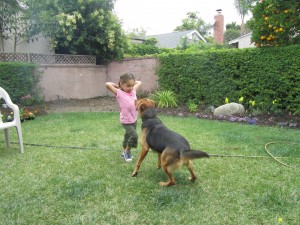 Sophie gave Thomas an adorable gift: the card was in the shape of a fish that said “Dad, you’re a great catch” and inside was a fishing pole with a bag of fish bait (trail mix) attached.  So cute! 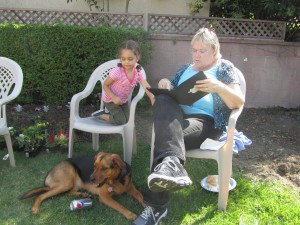 Sophie and her Auntie Judy playing with the iPad 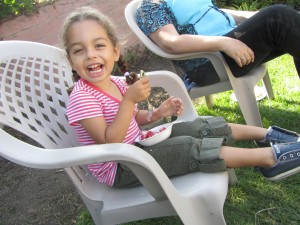 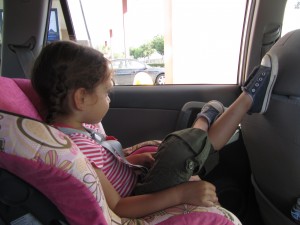 On the way back to her mom’s house, just chillin’

The weekend following the Catalina trip was my 10 year high school reunion so I asked my boss if there was any way I could work from home (Long Beach) during the week so that I could stick around for the event and she graciously said yes!  Lots of appreciation for my job that week. 🙂

Here’s my view from my laptop each day in my mom’s dining room: 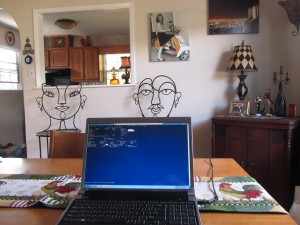 Aren’t those stools so cool? 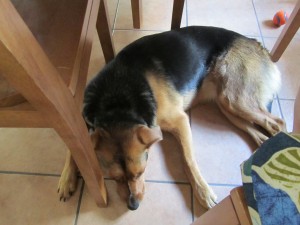 I worked a full day (with a few walking breaks here and there with Lola) and that night I met up with Brianne & Brian at Open Sesame on 2nd street.  I’ve been to this restaurant a handful of times before and I can’t get over how amazing their food is!  Their dolmas (grape leaves) leave a little something to be desired but other than that the food is incredible.  It was so nice catching up with two of my favorite buddies too!  Lots of laughs and story-telling was shared over dinner as well as plans to catch up again during the week.

Vacation detour: I actually came down with a really painful health issue so took part of the day off work to visit the doctor’s office.  After seeing the doctor, though, I didn’t feel any more confident about the condition and had to anticipate another doctor’s visit the following day in Norwalk (with Dorothy) and then another doctor’s visit again in Norwalk on Thursday (with my mom).  After being bounced around between doctor’s offices and feeling scared because I didn’t really know what was going on luckily the issue cleared up on Friday evening and the rest of the trip was spent much more comfortably.  The main lessons I learned from this experience: advocate for yourself with the doctors and receptionists/phone operators and read any online forums about the issue that you can find!  That’s where I read about the at-home treatment that ended up helping with the problem.

After going to the doctor’s on Tuesday I spent the rest of the afternoon resting up so that I could meet up with my brother Derek that evening.  We went first to visit my lovely Auntie Tina which included a couple of hours of hilarity (both by Derek and Tina and even the nurses at the front desk!) 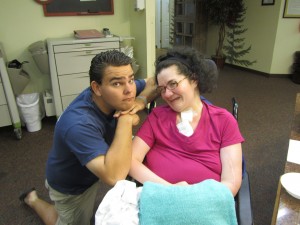 Tina and her favorite nephew

Like I mentioned earlier, Dorothy accompanied me to my second doctor’s appointment and after getting the run around again we spent the rest of the afternoon/evening together.  We checked out a couple of new (to me) scrapbook stores and then spent a couple of hours just hanging out in the garden with Lola and talking.  I was invited to dinner with her and George and I had an amazing shrimp and asparagus pasta…mmm, mmm, mmm I can taste it right now!  🙂

My mom accompanied me to my third doctor’s appointment and we then spent the rest of the afternoon/evening together.  She took me to Ranchito, an AMAZING Mexican supermarket in Westminster.  At first we went there specifically to get a giant fresh squeezed juice but then ended up buying a bunch of food and inviting Derek over for dinner at my mom’s house.  This supermarket is incredible–they have an entire counter dedicated to the jugos naturales (natural juices).  There are a few options available to order–I got the Azteca with orange, spinach, nopal (cactus), pineapple and honey and it was SOOOO GOOD!  My mom got the Vampiro with pineapple, orange, beet, celery and apple which was good but a little too beety for our taste.  The woman behind the counter throws the entire piece of fruit or veggie into the juicer so no nutrients are lost.  I wish there was a Ranchito by our place in Oakland!  We’re on a mission to find something like this since it sure beats Jamba Juice! 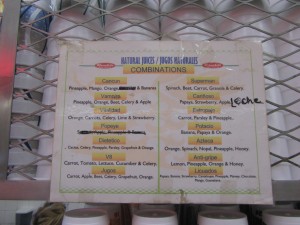 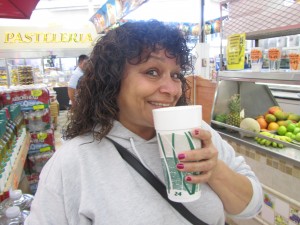 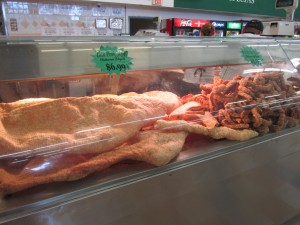 Although I didn’t buy anything from the meat counter I couldn’t help but take a photo of the HUGE chicharron–they fried up the entire skin of a pig!  Crazy and so gross at the same time, hahah.

I had intended to go to my friend Alison’s yoga class in Irvine at Yoga Shakti (she teaches a few times a week, check her out if you’re in the Irvine area!!) but my health issue became extremely painful that day so I slept for a long time that afternoon.  When the pain didn’t subside I finally followed the advice on the online forum posts I had found and after taking a second nap the issue had begun to clear up!  Again, I can’t emphasize enough the importance of doing your own research and trying to heal yourself naturally.

That night I met up with Dorothy, Brianne and Brian at Judy’s house for some dinner and games.  We used to go over to Judy’s to kick each other’s butts on Wii and hadn’t done that in a long time so we had a blast.

I was so happy that I was down in Long Beach for the ribbon-cutting ceremony of the Manazar Gamboa Community Theater!  I was honored to have known Manazar through my mom (he was my mom’s writing mentor at the Homeland Cultural Center in LB, directly behind the new theater) and it was so perfect that I was able to attend such a wonderful event honoring his life 10 years after his death.  Here’s a Press-Telegram article which talks about Manazar’s life and the theater (and my mama’s even quoted!)

Beautiful mural of Manazar on the side of the theater 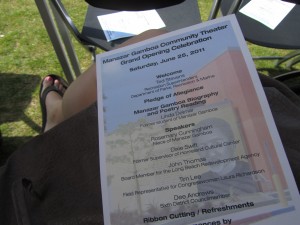 The program–see my mom’s name? 🙂

Mom with some of the Homeland staff 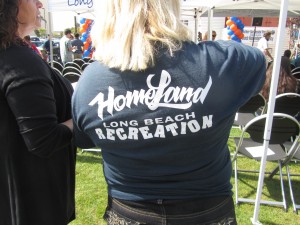 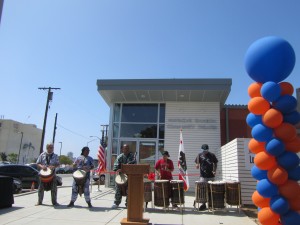 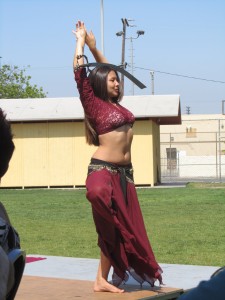 A very cool belly dancer who shook her hips while balancing a sword on her head.  Now that’s talent. 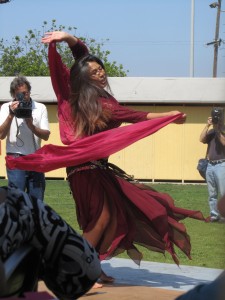 My mom reading Manazar’s biography and two of his poems

She is at home in the spotlight!

Right after my mom finished talking I had to take off to meet Carleigh at the Long Beach airport!  She flew down for the day so that we could go to our high school reunion together.  It was lunch time so we rushed off to Open Sesame (yes, the same Open Sesame I went to on Monday) for some more amazing Mediterranean food.  Then we took a stroll around Colorado Lagoon with the Lola-meister.  It as such a beautiful day and I had never walked around the entire lagoon before! 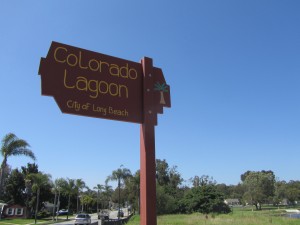 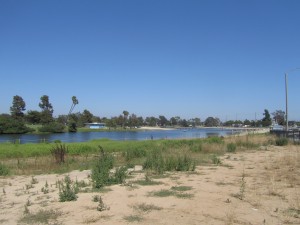 We dropped Lola off and went to get our nails done for the event.  I’ve only gotten a pedicure a handful of times and I always forget how nice they are!  Then we went home to get dressed for our reunion! 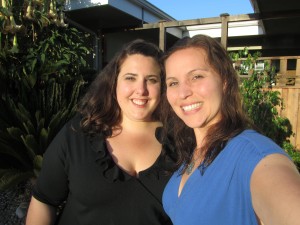 Me and Carleigh all dolled up

The reunion was interesting but definitely not the highlight of my week in Southern California.  It was nice reconnecting with a couple of folks and I just hope that more people attend our 15 or 20 year reunion.  🙂

Carleigh, Lola and I packed ourselves into the car and after a quick breakfast at Grounds we were on the road!  7 hours later we pulled into San Francisco to unpack and ready ourselves for another week in the city.

4 observations on “Trip to Long Beach!”