Spa day treat after the half-marathon

My mom and Steve treated me to a spa day after my half-marathon–it was JUST what the doctor ordered! We went to Glen Ivy Hot Springs in Corona and I could not have asked for a better time to feel refreshed after my race.

The day was gloomy and we weren’t even sure if the spa was going to be open but it seems there were about 50 other crazy people with the same idea as us. 😉 We got there around noon and had four hours to spend in the hot sulfur baths, the sauna, the jacuzzis and, of course, the mud bath! 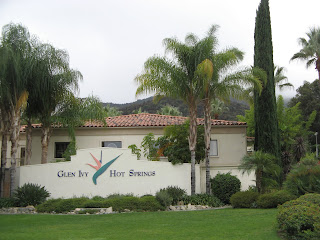 Love this place. If you live in Southern California and haven’t been here yet, you must get there now! 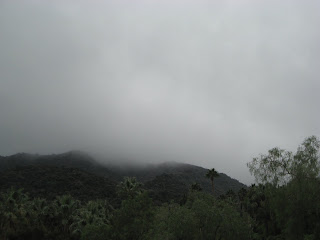 The weather reminded me of Hawai’i 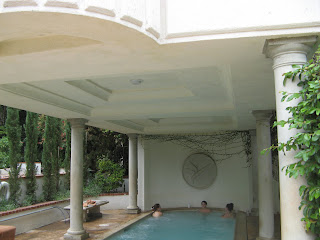 One of the saltwater jacuzzis. Amazing! 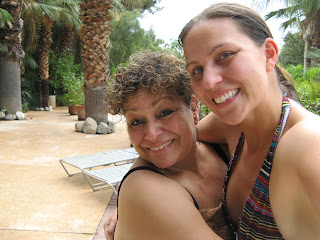 Me and my Mama Jones 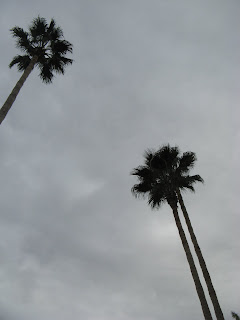 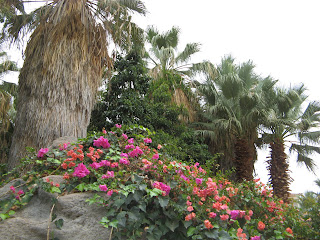 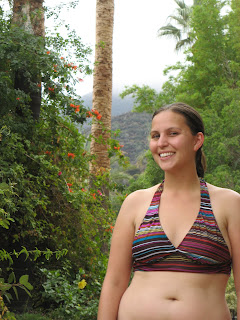 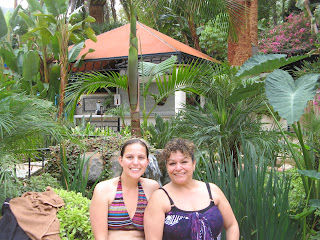 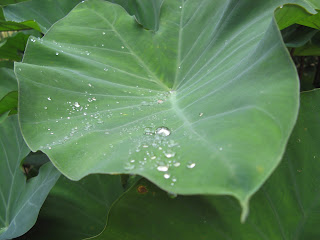 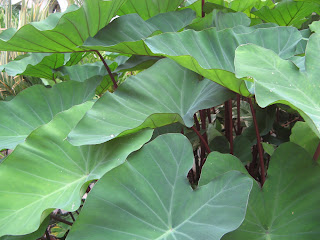 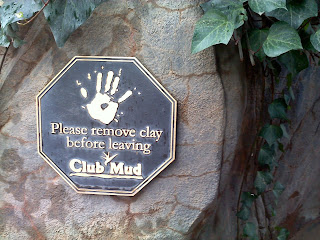 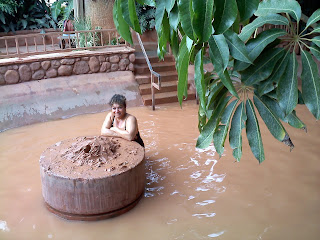 My mama, the pro at this whole mud thing 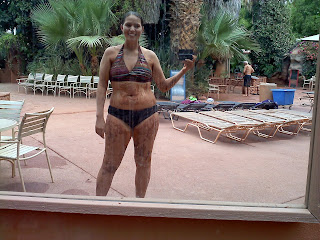 A self-portrait after the mud has baked in the sauna a bit. 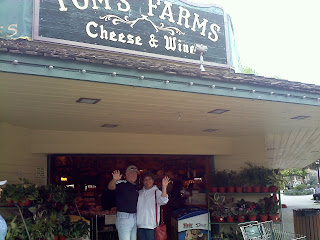 Haha, I love that they waved and looked hokey just as I asked them to. 🙂 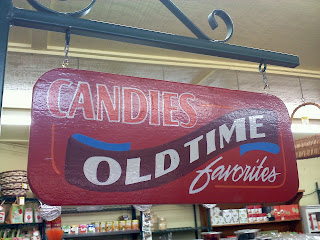 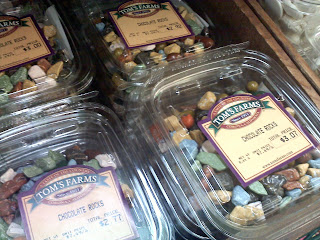 They have the coolest candies here! Chocolate rocks…awesome. 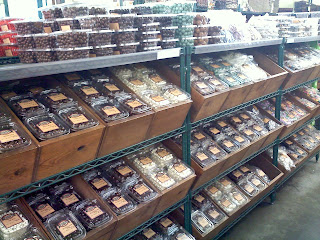 My idea of heaven.

Such a lovely way to end a great trip down to Long Beach. Thank you both so much!!

On Sunday 10/17 I completed my first half marathon (13.1 miles) and I am so so so proud of myself for doing it! I participated in the Long Beach International City Bank half marathon and had a fantastic experience even though it was a really rough run.

The night before I was up half the night with food poisoning. The day before I didn’t eat much since I wasn’t hungry (probably nerves) and that night went to eat at a local Italian restaurant at the urging of my mom who encouraged me to carbo load for the next day’s race. I knew it’d be good for me so I went even though I wasn’t hungry. After a plate of spaghetti and meatballs I felt overly full (hadn’t felt like that in a long time) and we decided to take a walk in Seal Beach to walk the feeling off. My stomach wasn’t happy with me for eating so much (or so I thought) and after some uncomfortable visits to the bathroom at the Coffee Bean I thought it was all over.

I went to bed at 9:30 so that I could get enough rest for the early morning start time. At 10:30 I woke up shaking violently and feeling nauseous. I ran to the kitchen and proceeded to throw up all of the spaghetti I had eaten hours before. After falling back asleep at 11pm I woke up at 1am sweating profusely and having to run to the kitchen again to throw up what water I had in my system. I woke up again at 3am feeling like crap but luckily didn’t have to get up.

So when my alarm went off at 5am it’s probably pretty obvious that I was not feeling my best. My head was pounding. My body was aching all over. I was dehydrated and had no appetite. To be honest I was about 50% sure that I wasn’t going to be able to go on with the race. But the determined part of me that doesn’t like to give up kept insisting that I didn’t drive 400 miles, I didn’t have tons of people rooting for me, I didn’t pay the $90 entrance fee, and I didn’t make it a goal to run a half marathon before my 27th birthday for nothing!

My mom and Steve drove me there (thank goodness because I don’t think I would’ve been able to handle the traffic and the stress on my own). The traffic was horrendous (when 20,000 people are trying to get to the same place it doesn’t make for easy traffic) but we got lucky and a police officer randomly told us to take a different exit which saved us tons of time. We walked a couple of miles from the parking lot and before I knew it I was at the starting line.

When I started the race, my body was aching so much it felt as though I had already run 13 miles. Not good. But the gun shot off and I started running. The longest run I did in my training was the week before and I ran 10 miles in 1 hour, 50 minutes. Generally I run at least 4-5 miles without stopping and then when I do stop it’s only for a minute or so and then I keep running. This time, I didn’t even make it to the 2 mile mark without walking. I’d start running again for a bit and then have to stop to walk for a mile. It was terrible. At mile 6 I was reunited with my mom and Steve and saw my friends Alison and Seth who drove up from Irvine to see me and they gave me a little boost of energy. But it didn’t last long. I was feeling so incredibly sluggish and I wanted to call my mom and tell her to come pick me up because I didn’t think I could do it. I was on the verge of tears a few times when I’d be jogging so slow people were walking faster than me. It was the most difficult run I have ever done and more than the physical difficulty it was mentally difficult to continue. But I did.

The water and PowerAde breaks every couple of miles helped immensely and I started to feel hydrated. At mile 10 I decided to try one of those Clif Bar energy gel shots (a funky thing I had heard of before but wasn’t interested in trying previously, it’s like the consistency between pudding and jello and I was definitely not excited to try it). It had an immediate effect on me and I felt increasingly stronger and more energetic. The thought of my friends Alison and Seth leaving because she had yoga teacher training at 12noon in Huntington Beach inspired me to get to the finish line as quickly as possible. So at mile 10 I started running. And I didn’t stop the entire time.

At mile 13 I saw my mom and Steve and the tears started welling up. With only .1 miles to go, I just took off and started high-tailing it. I ran as fast as my body could take me. You know, you’d think more people would do that when the finish line was in sight, but no one around me was doing that, so I must have looked like a crazy woman to all of those hundreds of spectators. But I didn’t care, I was going to finish the race strong.

After 3 hours and 19 minutes of an extremely difficult run I crossed the finish line as the tears rolled down my cheeks. I have never felt more proud of myself than I did in that moment. It was an extremely difficult road (not just the run itself by the months leading up to it) but I did it. And I am so excited to call myself an athlete and to continue running for the rest of my life. 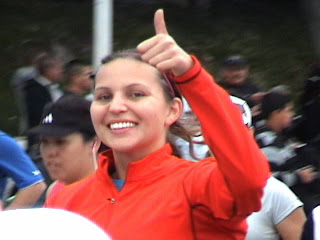 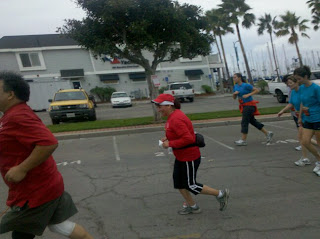 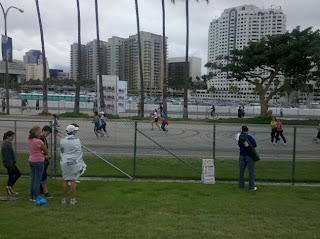 I’m dead center–this is at mile 13 when I just started to high-tail it to the finish line. 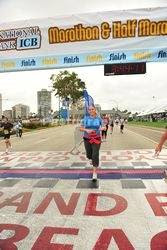 Crossing the finish line with a huge smile on my face! I ordered a copy to come via mail and will hopefully have it soon. 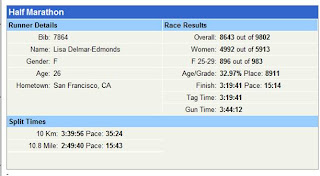 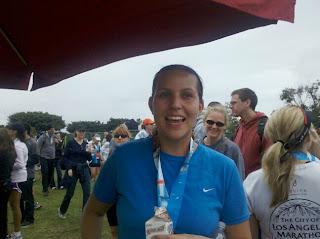 Alright, blog world, I’ve got an important announcement to make…are you ready? Okay, here it goes…I’m going to run my first half-marathon this year!!! 🙂

Kimberly, a friend who I used to work with at the Aquarium of the Pacific in Long Beach, and I have decided to train together for the Long Beach Half-Marathon in October (on 10/17 to be exact)! She’s still living in Long Beach so we’re going to be training long-distance together. We’ve already been at it for a few weeks, so I thought it was about time I made the official announcement on here. 🙂

We’re both avid bloggers (one of her other blogs about her adorable sons can be found here) and so we decided to make a blog together about our journey! We’re working on updating it more, so right now it might look a little bare in terms of posts. But hopefully you’ll all become followers over there too!

I’ve been running with Lola three days a week and this past Friday I asked Kevin to go along with me and to my surprise he said yes! We went to Golden Gate Park to run along the trail. 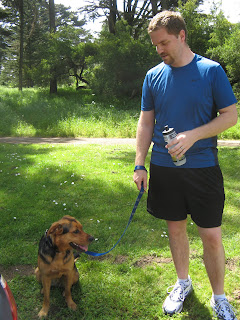 I gotta get him in workout clothes more often! 🙂 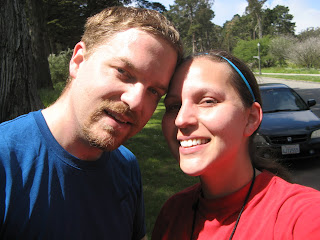 We decided to reward ourselves with a DELICIOUS lunch at San Francisco Meats & Delicatessen. We’d been there once before and remembered how freaking good their sandwiches are so made the drive from GG Park to Ocean Avenue just to get our hands on a couple of their sammies…and boy were we happy we did! 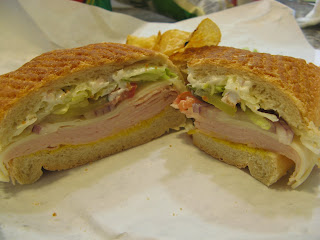 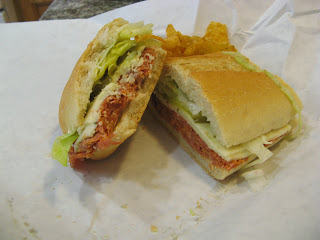 Kevin got the hot salami with pickles, lettuce and mayo on a sourdough roll

At least we worked out before eating there, I guess it’s better than us just driving over there without working out all day…right?? 🙂

On Saturday night we were invited to a housewarming party for some new friends of ours. Terri and Scott are friends of Mika and Matt who we met through our friend Cynthia from Long Beach (Phew! That was a mouthful) They recently bought a new home in Concord (just past Walnut Creek) and we had a great time at their shindig. I didn’t take any pictures at the party, but Mika, Kevin and I took a quick trip to Baskin Robbins (Mika’s pregnant, so she was our excuse, haha) and lo-and-behold what do I find….? 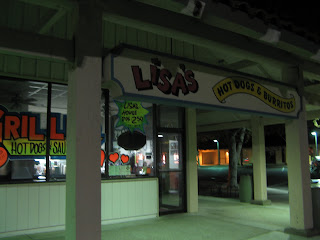 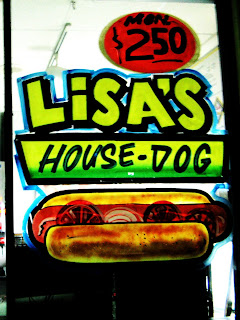 Their reviews look pretty good on Yelp, so maybe next time we go visit Terri & Scott we can have lunch at my hot dog shop. 😉