I was given an amazing opportunity at work to make a trip down to Mexico City in early May and I had such an incredible time!  I will be taking over Registrar duties for the Teacher Education students that study at our Mexico City campus and so I went with my boss and another administrator to visit the campus, visit some K-12 schools, and work on a plan for the fall semester.  It had been many years since I last visited Mexico and the only places I had ever visited growing up were Tijuana, Rosarito, and Baja California so I was really excited to see other parts of Mexico and to be immersed in a Spanish-speaking country again (the last time I did that was in 2004 when I was studying abroad in Nicaragua).  I have to admit, I was really nervous about how I’d do with my Spanish but I was SO happy to find out that it came back pretty quickly!

(I may or may not have needed a refresher myself before my trip!)

I jumped on a plane from SFO in the afternoon to Benito Juarez airport in Mexico City.  The flight there is 3.5 hours and it was a pretty nice, easy ride in.  Dinner was $7 worth of cheese, crackers and dried fruit… 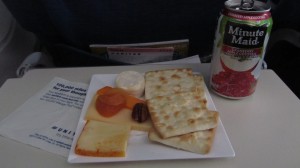 We landed around 8pm (Central time, Mexico City is 2 hours ahead of CA) and after crawling our way through customs we were finally standing on Mexican soil!  We took a cab to our hotel (more on our hotel later) and after checking in it was around 9:30pm but we were starving so we went to the restaurant on the first floor called Sanborns Génova.  We were given a basket of bread, crackers and tortilla chips (all in the same basket) to hold us over as we waited for our food.  I ordered the most amazing shrimp tacos I have ever eaten in my entire life and I swear I dream about them even now!  Hahah. 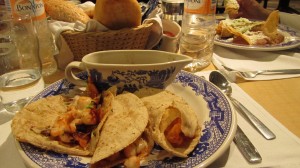 The most delicious shrimp tacos ever created.

After dinner we went up to our respective rooms to try to get some sleep before the next day’s activities.

We met for breakfast on the first floor and I was so impressed with the breakfast brunch!  There was such an amazing spread of fresh fruit (including papaya and mango) and some amazing fresh-squeezed orange juice and a huge basket piled high with pan dulce (my favorite).  And to top it off, there were about 6 cages filled with parakeets chirping along in the breakfast lounge.

The beautiful breakfast lounge on the first floor.

Oh how I wish I could eat like this everyday.

Our university’s campus is within two blocks of the hotel we stayed at and it was such a beautiful day so the quick walk was enjoyable. 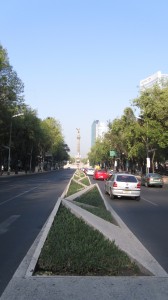 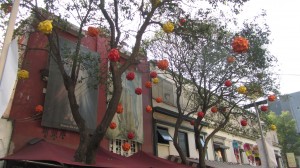 Neat outdoor decorations in front of a church 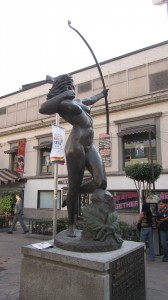 The following are photos of the Alliant International University (the university I work for) campus in Mexico City:

The front of the campus 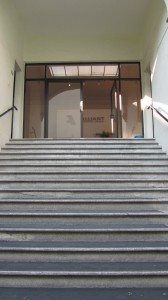 The front entrance (once you get past the security guards, of course)

Beautiful courtyard in the middle of campus! 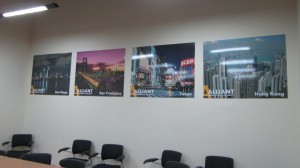 I loved these posters, showing our different campuses (San Francisco, San Diego, Hong Kong, Tokyo amongst the others in California) 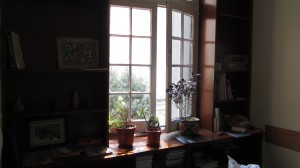 I would LOVE to have that view from my desk!

We were in a few meetings through mid-day but my boss and I got lucky with having the entire afternoon free to explore the city.  Our tour guide Sarah (who works for the university) led us downtown for lunch, sight-seeing, and some shopping.

We went to lunch at a restaurant called El Mayor which is on the roof of a building that oversees the excavation site of Aztec ruins.  The view was INCREDIBLE if you can imagine and the food was pretty darn good too!

Overlooking the ruins of the Aztec pyramid Tenochtitlán 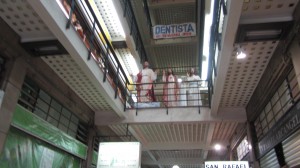 Necklaces with the Pope’s face 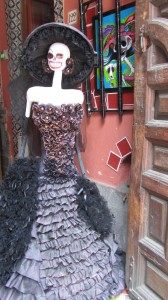 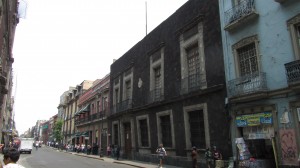 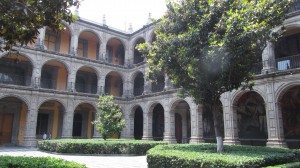 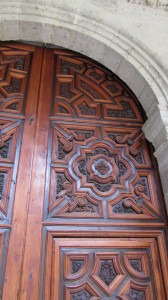 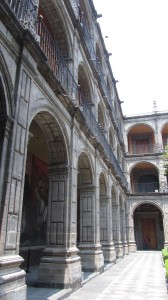 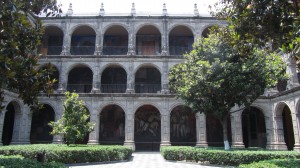 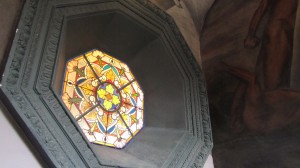 Most of the exhibits were closed that day but the one exposition I was able to see was the photography of Flor Garduño. 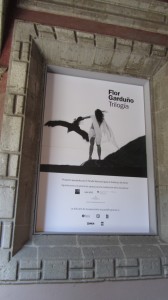 Sarah left us at the museum to go pick up her kids and then met up with us again after about 45 minutes of exploring the museum.  Her kids are Beatríz (10) and Oliver (7) and they were so incredibly adorable!  They have such great, spunky personalities and were fun exploring the city with.  We took a cab to an outdoor market to do some shopping. 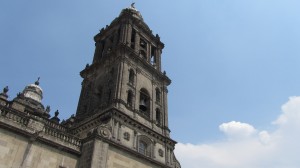 A beautiful church we passed on the way

Me, Bea and Oli in the taxi 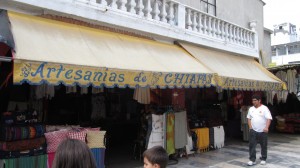 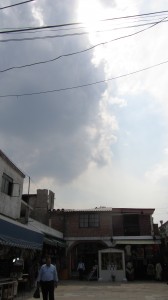 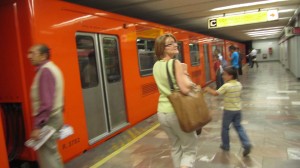 Sarah and Oli about to jump on the metro 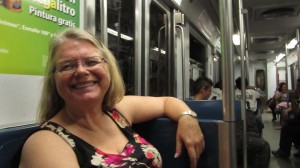 Trudy on the metro

After parting ways with Sarah and her family, we had an hour or so to relax at the hotel (read: take a nap!) before heading out to dinner.  The concierege recommended Fonda El Refugio for dinner which was just a few blocks away and it was the perfect choice.  The special for the day (manchamanteles) sounded really good but I wanted it without meat (it came with a choice of pork or chicken) so I asked the waiter if that would be possible and it was cracking us up because he and about 3 others waiters stood in a circle and discussed if it would be possible for a few minutes before letting me know that they would be able to make the exception for me.

At the end of the meal we were provided with three lollipops covered in plastic wrap and a small bowl of hot water and were told to dip our lollipops in the water for a few minutes until the plastic fell off and then to suck the lollipop.  I had never experienced anything quite like that before and it was interesting to say the least!

After dinner I decided to explore the hotel a little bit to capture some photos.  We stayed at the Hotel Geneve which was built in 1907 and is an historic hotel and building.  My room was on the third floor and there were so many little corners and hallways to explore, I don’t think I saw even half of it.

View from the street 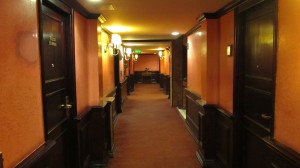 The lobby was one of the most beautiful rooms I have ever seen in my life: floor-to-ceiling bookcases filled with old books, chandelier, stained glass windows, gorgeous seats, fresh flowers, art everywhere… 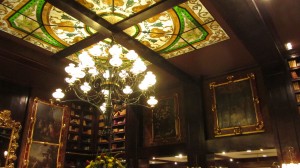 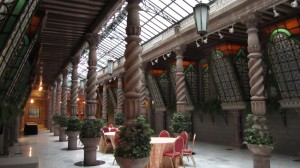 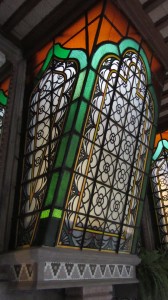 Some neat details found in the lobby… 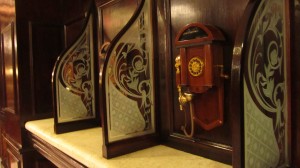 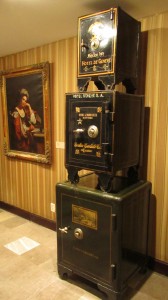 Display with a bullfighter’s clothes

The bar/lounge (too bad the singer they had performing that night was awful otherwise we would’ve spent some time in there!)

Me sneaking in a photo of myself (proof that I was there! Haha)

We woke up bright and early to meet at the campus so that we could begin our day visiting two K-12 private schools in different parts of the city to work on partnerships with them.  Both schools are bilingual so all students are fluent in both Spanish and English (and not just speaking but in analyzing literature and philosophy in both languages).  I was so incredibly impressed with the schools and, although I realize they are private schools and are not the typical experience for every Mexican public school student, these schools reminded me of how far we still have to go even with our public schools.

We did a lot of driving that day, from one part of the city to the other.  We passed Los Pinos, which is the residence of the President of Mexico. 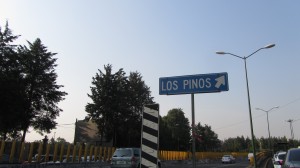 And we also drove through Chapultepec Park which is the largest city park in Latin America.  It reminded me a lot of Golden Gate Park in SF and I’d love to explore the park more next time I’m in Mexico City.

After the all-day visits we ended up back at the campus for an evening reception for our recent graduates who earned their Master of Arts in Education: Teaching degrees.

We got back to our hotel around 6:30pm but I wasn’t feeling too hungry so decided to make a visit to the hotel’s gym downstairs to run 4 miles on the treadmill in preparation for the Bay to Breakers 12k race I had signed up for that was only four days away.  I hadn’t run on a treadmill in a long time and I realize how much I thrive running out in the open and not in a cramped room with no fresh air and no pavement/gravel beneath my feet!  I think next time I’m out of town or out of the country I’ll plan it better and go for a run out in the city instead.  But it was nice having the gym to fall back on!

We were up at 5am to pack our bags and get ready for one last school visit (our appointment with the school was at 8am and it was in a hard-to-get-to part of the city, hence the ridiculous wake-up call).  After that final school visit we said our goodbyes to Sarah and the other staff and made our way back to the airport.  The flight back was 4.5 hours and luckily I slept most of the way!

I had such an incredible time and feel so fortunate to have had the opportunity to go there for work.  Although I’ve got a lot of work ahead of me to take on the Registrar duties for our Mexico City students I’m really looking forward to it! 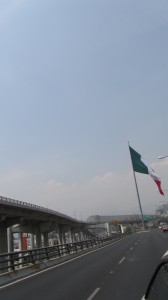