Moving to Oakland has been a bit of a culture shock when it comes to having a dog.  We were plain spoiled living in San Francisco with their 35+ dog-friendly off-leash parks and their countless other parks that are accessible to dogs on leash.  This is one of the biggest things I miss about living in the city.

Oakland has a total of 5 dog parks and just about every other piece of grass in the city is off-limits to dogs.  It doesn’t even matter if the dog is on leash, our little Lola is not allowed to set a paw on the grass.

Granted, living in the Bay Area we are still pretty spoiled compared to other cities across the States.  Even with our measly 5 dog parks in Oakland, surrounding us are cities that have as many (or more) dog-friendly spots that we’re just a quick drive away from…and we have been taking advantage of those spots!

This is an amazing 500-acre park set in the Oakland Hills with miles and miles of winding trails.  It’s a great place to let Lola off-leash except we have to pretty careful for the joggers and mountain bikers.  Kevin and I have gone to this park twice now and each time we can’t believe that this amazing forest is just minutes from our apartment near downtown Oakland.

Kevin getting a whiff of wilderness (I don’t think he knew I was taking this photo when he bent down to smell that fallen tree, haha)

There is a small city surrounded by Oakland called Piedmont and they have a great park that allows dogs to run off-leash.  The trails are mostly paved but when you’re in the park you’re surrounded by a huge canopy of trees that no matter how bright and sunny it is at that time, it’s cool and shady in the park.  The creek running through the middle doesn’t hurt the view either.  Kevin and I have gone walking the trails and me and Lola have gone running a couple of times as well.  This is a little gem!

Now sure why it’s got such an official-sounding name, I just call it the Alameda dog park.  This is a huge fenced-in dog park just minutes from the beach on the island of Alameda and the best part is it’s only a 10 minute drive from our apartment.  I take Lola here at least once a week and she has a blast running around with the other dogs.

After a trip to the Alameda dog park last week Lola and I drove by the beach in Alameda and I couldn’t pass up such a beautiful sunset so I pulled over, brought Lola out, and had to tie her up to the fence because of the “No dogs allowed” sign that greeted us. 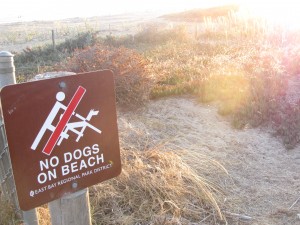 “No dogs on beach” 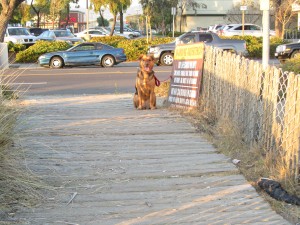 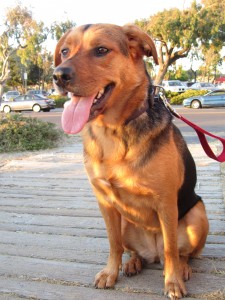 That girl is always happy, no matter if she’s tied to a pole or not.

Can you spot San Francisco in the distance??

We’re still looking for a couple of pieces of furniture (most urgent? A desk!) so decided to check out a place my co-worker told me about called Urban Ore in Berkeley which is a salvage yard full of any ol’ thing you can think of… 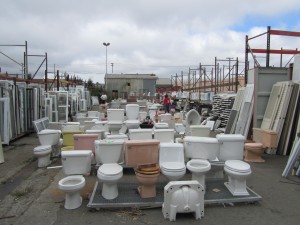 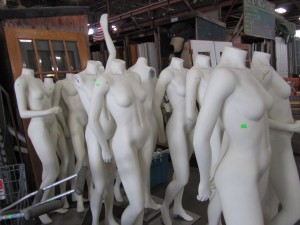 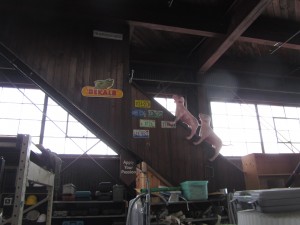 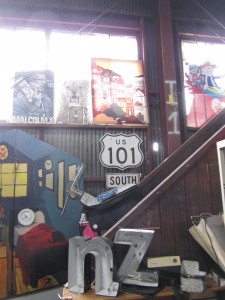 Unfortunately we didn’t find anything that sparked our fancy but I think we gotta give it another few shots because the inventory changes so frequently.

On July 17th we met up with our friends Darinee and Danielle who we met at Redlands at Stern Grove for one of their summer music festivals!  I hadn’t been to a Stern Grove festival since my first weekend in San Francisco (see post with Jessie in ’09 here).  The headliners were The English Beat, an 80’s group that had a few hits and overall they were a great group to see live.

Some of you will remember that this was the day of the Women’s World Cup finals so Kevin and I met up with Carleigh and Scott that morning to watch the match and we were planning on getting to the park in time for the cover band but of course the match went on super long (but SUPER exciting, on-the-edge-of-our-seats excitement!) so we had to stay to see the end of the game.  Because of that we didn’t get to the park until pretty late when it was already jam packed full of people and The English Beat were setting up on stage.

I called Darinee to find out where they were sitting and once we were finally able to spot them we had to then make our way up an extremely steep hill with all of our food and Lola in tow which was not an easy feat!  At one point Kevin decided to pick Lola up and walk her up the hill because there were so many people she was stepping all over.  I have never seen anything like it!  Kevin carrying a 55 pound dog up a steep hill with all of these people surrounding us.  I’m just glad that he didn’t fall backwards from the weight of carrying her!  That man amazes me. 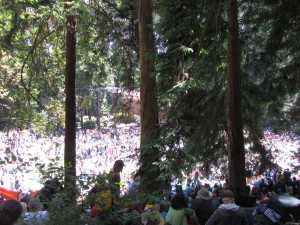 The hundreds and hundreds of people at the festival (this was our view, of the trees, haha. At least the acoustics were pretty good!) 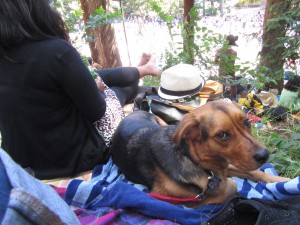 Lola not too happy about laying on a steep incline 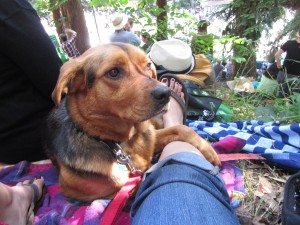 Lola trying to relax on the incline!

This was Kevin’s first time at the music festival and we had a blast, especially with the company we shared the day with!  We hope to make it out again this month while the festivals are still going on.

On July 22 we had the amazing opportunity to babysit 13-month old Mia!  It was Matt’s birthday so Mika took him out for a night on the town and asked if we’d watch her for a few hours which we enthusiastically agreed to.  Mia is in love with dogs and so they said that we could bring Lola with us if we wanted to which was a bonus.  Seeing those two together just about melts my heart!

Mia’s favorite thing to do with Lola? Play catch.

Mia’s second favorite thing to do with Lola? Tease her (and just about give me a heart attack) by putting Lola’s ball up near her mouth. 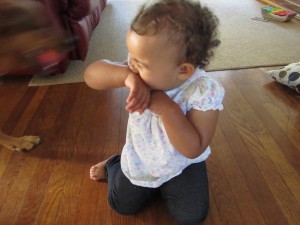 Mia’s third favorite thing to do with Lola? The anticipation of getting a wet, slobbery kiss from her! Every time Lola would walk by her she’d lift her arm up to her face and laugh hysterically in anticipation of the kiss. So. Cute.

After a yummy dinner of pasta, peas, and berries (that girl can eat!) we took a short walk to the park down the street for some play time. 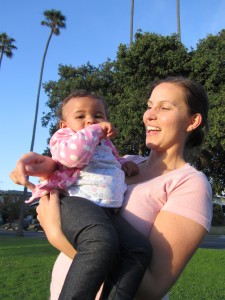 Me and Mia just after coming up from a flip

My favorite picture from the day!

Walking home, trying to get a kiss from Lola 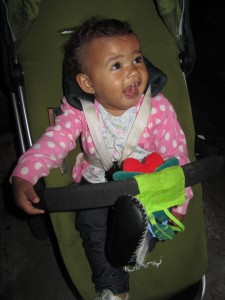 That same weekend Carleigh and Scott were moving from their apartment in San Francisco to an awesome little place in Berkeley (they followed us across the bay, yay!) and so asked us to return the favor (since they watched Lola the day we moved) and dogsit Bailey for the big night. 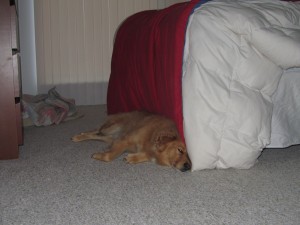 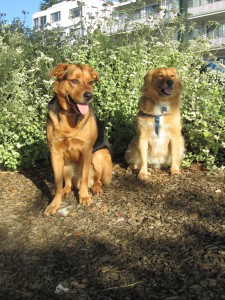 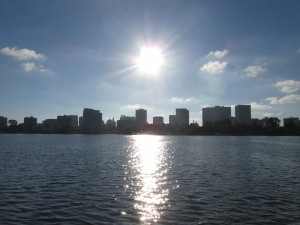 Sun setting over the lake. I don’t think I’ll ever get over our view!

Last weekend we were invited to the happy celebration of Mia’s first year on this planet!  Mika blew us away with the amazing decorations, it felt like we were stepping straight into a magazine spread!

The cutest “Happy Birthday” banner ever. 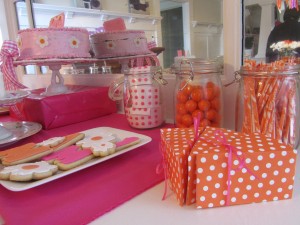 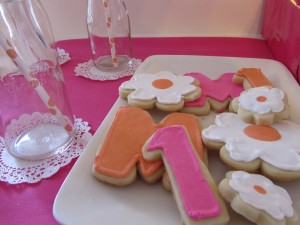 Mini milk bottles for the kiddos to have milk and cookies

Some cute family photos of the cutest family in Alameda… 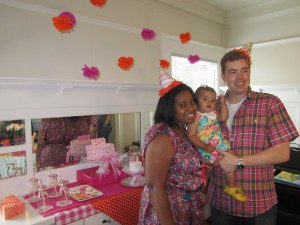 This was taken just seconds before Mia snapped the elastic band on Matt’s party hat!  I wish we caught that on video. 😉

Blowing out the candles with mom and dad

She’s thinking “I can get used to this!” 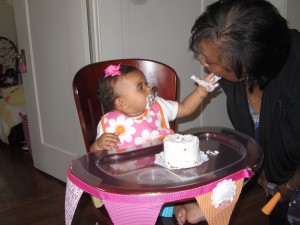 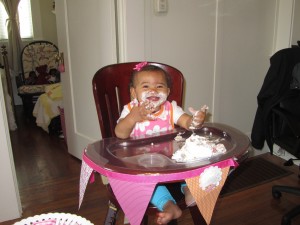 I can’t get enough of that face! 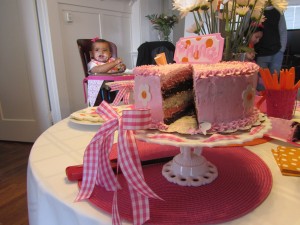 An incredible neapolitan cake for the rest of us (made from scratch by Mika!)