Now that the whole world knows our exciting news I thought I’d share a few behind-the-scenes updates on the pregnancy–how we found out, what we’ve been experiencing these past 11 weeks, etc., etc.

Kevin and I have been looking forward to being parents for a long time now but it wasn’t until this year that we began seriously trying to start a family.  When we were camping in Big Sur in late September I had an inkling that we might actually be pregnant.  We told Brianne and Brian and it was strange to have the words “we might be pregnant” come out of our mouths.

5 weeks (baby’s the size of an apple seed)

Early morning the first day we were back from our camping trip (Tuesday, Oct 4) I took a pregnancy test.  I had taken one before but seeing the two pink lines was a very surreal experience.  I remember staring at myself in the mirror for a minute or two, not quite able to believe what I was seeing.  I went in to wake Kevin and tell him the news and we were immediately so, so, so excited.  The first thing I did was look up our estimated due date and, based on the first day of my last period, we were looking at a baby being born around June 6, 2012!  A Gemini…yes! 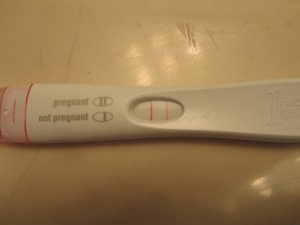 At the time we were barely 5 weeks along so it was still super early to share the news with many people but you know we couldn’t keep it to ourselves completely!  We confirmed with B & B that we were, in fact, pregnant, and then told my sister Jessie and our good friends Carleigh & Scott as well.

7 weeks (baby’s the size of a blueberry)

On Wednesday, Oct 19 (just one day before my 28th birthday!) we had our first prenatal appointment.  We weren’t sure what to expect and were a little nervous going into it.  It was interesting being in the waiting room with all of these women (and some male partners too) at very different stages of the pregnancy–some women looked just like me and some had bellies that looked like they were about to pop!  The visit didn’t last more than 30 minutes, they just did a few blood/urine tests, we filled out a ton of paperwork, and then we scheduled our next three visits.

On Saturday, Oct 22 we went to our first pre-natal class that is offered through Kaiser.  We were in a room with about 12 other couples who were between 7 weeks and 12 weeks along.  We went around the room introducing ourselves, saying how far along we were, and saying how we felt.  The woman ahead of me had the same due date as us but she said it was a miracle that she was able to attend because she had been so so sick.  Then it was my turn and I said we had the same due date but so far I haven’t felt sick at all!  Almost all of the women said “just wait!” but so far (knock on wood!) I haven’t been sick at all.

That same day we had scheduled Skype dates with my mom and with Kevin’s parents to share the news.  It was getting too difficult keeping it to ourselves and we were so excited to share the news with our families!  We called my mom first because it is her first grandchild after all.  Her reaction was pure gold and I am SO happy we decided to capture it on video so we could watch it again and relive the moment.  I’ll have to post it at another time because we haven’t reformatted it yet.  But the anticipation will be well worth it!  🙂  I can at least fill you in on how we broke the news to her: Kevin and I decided to use the baby’s Western and Chinese zodiac signs as a hint since my mom’s really interested in astrology. We told her that Kevin was going to get a tattoo of a double-headed dragon tattoo to commemorate the “Gemini Dragon” (the baby will be a Gemini born in the year of the Dragon).  She wasn’t too interested in the tattoo part…but when I told her that it was going to commemorate the birth of her first grandchild…well…I won’t spoil it for you and just let you watch later!

That weekend we told the rest of our families–my dad, our siblings, etc.–and it was so great to be able to share our news with everyone finally!

8 weeks (baby’s the size of a raspberry)

Our first real appointment with my OB/GYN was on Friday, Oct 28 and we were lucky enough to get an ultrasound at that appointment as well.

I cannot truly describe the experience and what it meant to me.  So many people told me that it was such an emotional experience for them that I didn’t think it’d end up being that way for me.  Boy, was I wrong!  The minute I saw the little big-headed creature on the screen and realizing that it was inside of my body, I was in shock.  Then, we saw a flutter of a heartbeat. 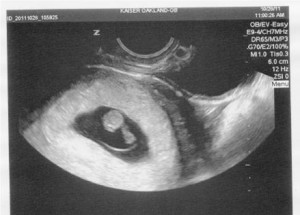 It truly was nothing short of amazing.

Some exciting news that came out of the ultrasound appointment: there was only one baby in there (hallelujah!) and our due date was spot on: June 6, 2012!

This brings us to the current week.  On Monday, Nov 14 we took a giant step and made the official announcement…via Facebook.  Nowadays it seems like nothing is truly official until it’s announced on Facebook and that’s what it definitely felt like this week.

I had this little plan in my head for weeks now and was so excited to finally unveil it.  I ordered a shirt for Lola and wanted her to have a big part in the announcement since people know how important she is to us.  I figured she could tell it so much better than Kevin or I could!

So I wrote a note saying, “Alright, Facebook, Lola has a really important announcement to make…!” and posted this photo of her: 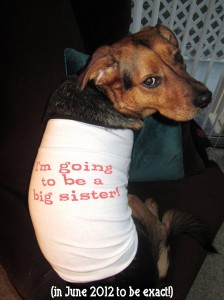 It was pretty hilarious seeing the confusion from some people not sure if Lola was going to be a big sister to a dog or to a human.

59 “likes” and 102 comments later and I think saying a lot of people were excited about this news would be an understatement.  🙂

17 observations on “A baby story”