So this time around I’ve decided to post bi-weekly instead of weekly. Now that we’re not preparing for our very first baby and now that I know a lot about what’s going on and what to expect (and with my life with a toddler and crazy schedule) it just feels better doing it bi-weekly. But the belly photos will still be weekly to compare week to week when all’s said and done (one of my favorite things to look back on with Sirena’s pregnancy!)

The start of the second trimester came with a whole lot more energy and I’ve only had to take a nap every third day or so instead of every day. 😉 And the timing couldn’t have been more perfect because this was the wildest week I’ve had in a long time. I’m producing my mom’s play “Shadows” and I was working like crazy editing her 100 page script, preparing for our first rehearsal with the directors and cast, preparing for and moving out temporarily while our house was tented (termites, oy!), and going on a 3-day work trip to Sacramento (this all within a 6 day span!)

Needless to say I am glad that week is over and that I survived somehow! The only major pregnancy development this week has been some intense lower back pain. I never experienced sciatica or really much back pain with Sirena’s pregnancy but I remember when she was a newborn I was lying flat on my back in my sister’s living room and I got a sharp and intense pain in my lower back on the left side which happened off and on over the past 2 years. The past couple of weeks, though, it has been really frequent and really intense. The pain is sharp and in my lower back but it doesn’t shoot down my leg like sciatica does. There have been a few times that I can’t put a lot of weight on my left leg or I have to modify the way I get up from sitting or laying down. Definitely something to talk to at my next prenatal appointment. 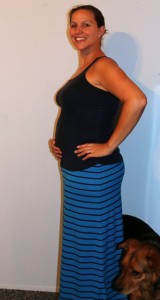 My little shadow Lola at it again! And can you tell I’ve been out of practice with these timed self portraits? I need to work on better lighting, haha!

Complete opposite of the previous week came a huge breath of fresh air with a much-anticipated family vacation! The trip coincided with my birthday which was an extra special treat. We went to Palm Springs with my mom and Steve and had an absolute blast. This was the first real vacation we’ve taken as a family since Sirena was 6 months old when we went to Zihuatanejo, Mexico, and it’s safe to say that this girl likes to vacation! The weather was still gloriously hot even in late October and we enjoyed an early morning hike, a trip to The Living Desert zoo, and lots and lots of pool time.

The only major pregnancy development this week is dizziness! I never experienced this before and thought it was just random but when I’d get dizzy at least once a day for a week I started to worry. I went to trusty Google and it seems that dizziness during pregnancy is common and is usually related to changing hormones, faster blood flow to baby, and slower blood flow to the mama. There was one day when I just could not shake the dizzy feeling off and I began to get a bit worried but since then it’s been okay. Just another interesting way to prove that no two pregnancies are alike! 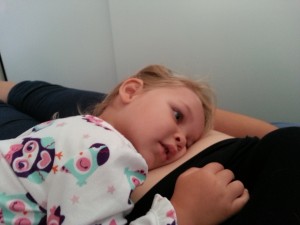