Kevin and I spent an afternoon walking around part of the huge Lake Merced in the southern part of the city.  I discovered it with a friend when we decided to do a 3 mile loop run a few weeks prior and wanted to take Kevin and Lola there. 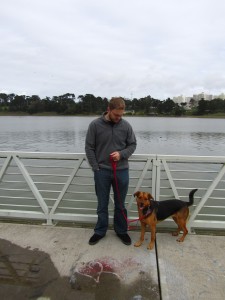 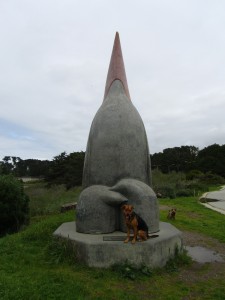 I know, we’re terrible doggy parents, always making Lola pose in front of the weirdest statues (this one, if you can’t tell, is of three penguins). 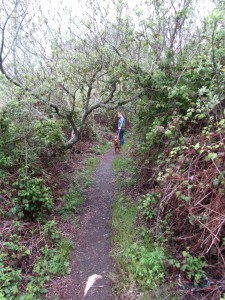 Kevin & Lola at the end of the path surrounded by strawberry bushes. 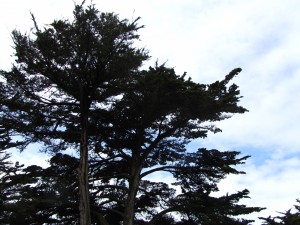 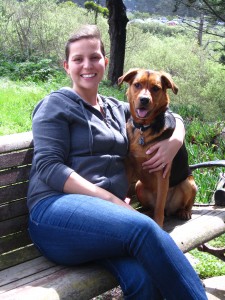 I know my hair looks terrible.  Unfortunately, Kevin didn’t think to tell me before he snapped this photo!  Hahah.

The first time I heard about Earth Hour was when we were in Australia in 2008 and although I had never participated in it I thought it might be fun to do it this year.  So at 8pm on the 26th we shut off the lights and hung out by candlelight. 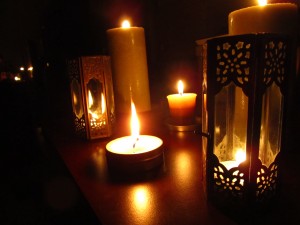 But of course we couldn’t just sit there and stare at each other in the dim light.  We had to do something.  And do something we did!  We spent a couple of hours messing around with flashlights, lasers and the camera to take some cool photos.  Kevin was the genius photographer behind all this and I “wrote” in the air with the light.

The first one was written with me facing the camera so I had to write backwards and in cursive–not the easiest thing, let me tell you!  But I think it turned out pretty good. 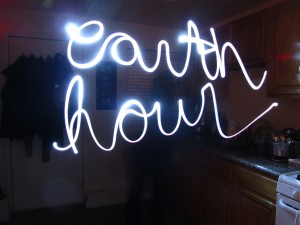 This second one we used a laser pointer and I wrote Lola’s name facing her.  The hard part was getting Lola’s body to be lit up so after I finished writing her name, Kevin flashed a flashlight on her for just a second so that her body could be captured in light (otherwise she would’ve been too dark to see). 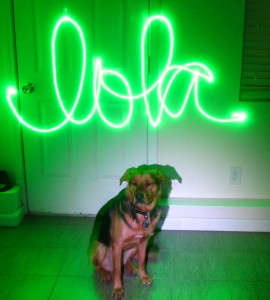 I’ve determined that we should honor Earth Hour more often so that it will get us off our rears and do something fun like this!  🙂