Right on the heels of my trip to Napa with Jess, Kevin’s brother Thomas and his girlfriend Ashley came up for a 2-day visit!  They were here early the morning of Monday 4/18 and left super early Wednesday morning (ahem, 4:30am wake up call!) but it was an adventurous two days to say the least.  This was Ashley’s first time visiting SF so we pulled out all the stops for her visit.  🙂

We spent the afternoon enjoying the concrete Seward slides (see our first visit to the slides here) in the Castro.  At first we only had a few scrap pieces of cardboard to slide down and they weren’t too useful when the slides were dewy so we were actually on our way back to the car when we spotted a brand-spankin’ new computer monitor box in all its glory just calling out our names.  So after some slick maneuvering by Thomas (who, in essence, rummaged through this random person’s trash for our sliding enjoyment) we were on our way back to the slides to get some extreme sliding in.

Kevin and Thomas (check out Kevin’s signature arm placement in this and the next photo, haha!)

The sliding was so extreme that on one ride down Thomas was propelled to his feet and then flat on his face!  The craziest part was that none of us even noticed Thomas flying through the air and all we saw were his arms and legs flailing up while on his back as the end result.  I’m still not quite sure how it happened.

There’s Thomas lying down in the slide!  “Help me, I’ve fallen and I can’t get up” 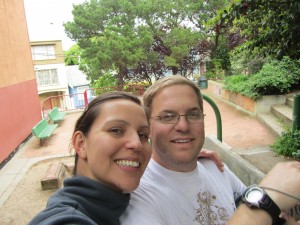 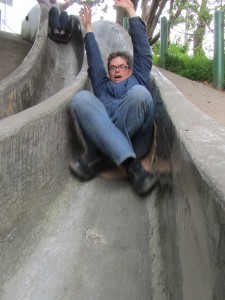 We then took a drive to our favorite part of Golden Gate Park, Stow Lake and Strawberry Hill.  It was a bit drizzly and foggy but we made the most of it with a walk around the lake and a hike up the hill. 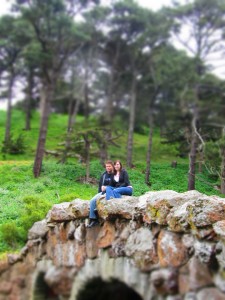 Thomas and Ashley sitting on the bridge over the lake (this was taken with a “miniature” mode on our camera, so cool!) 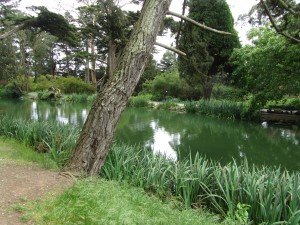 The green, green lake and its surroundings 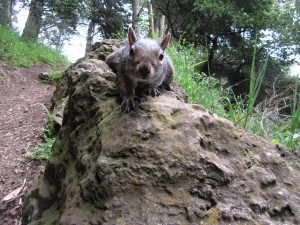 Well hello Mr. Squirrel!  He was anxious for some treats, too bad I tricked him and only wanted to take his photo. 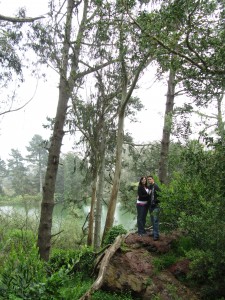 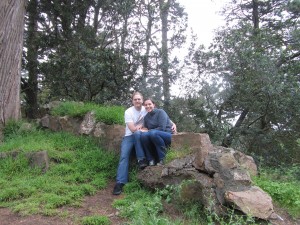 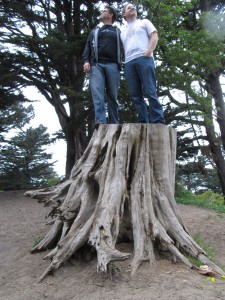 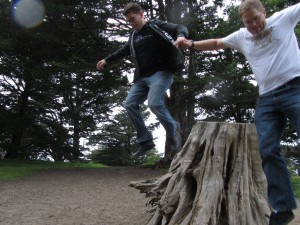 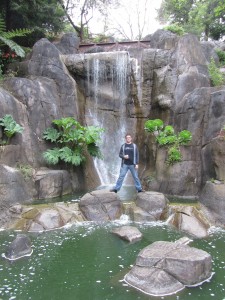 Thomas and the waterfall 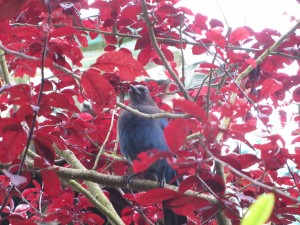 Bluebird amongst the fire red leaves

We then made our way through the Presidio and ended up exploring some of the abandoned bunkers on the coast. 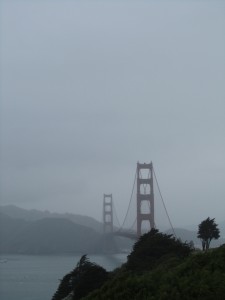 So apparently our camera also has a fish-eye lens mode–didn’t realize Kevin took this photo in that mode until later, hilarious! 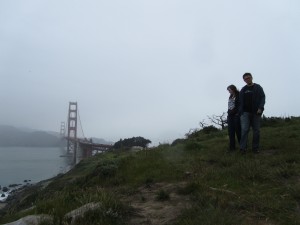 Ashley, Thomas and the GGB 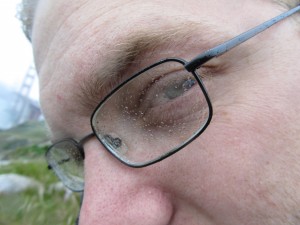 See how drizzly it was?  Water was covering Kevin’s glasses.

We had a lovely evening introducing Ashley to the world of Indian Pizza at Zante Pizza.  YUM!!!

The following day while I was at work the three amigos went to explore the Marin Headlands.  They were trying to find the entrance to an underground bunker that apparently hasn’t been sealed shut and only a handful of people have been successful finding but, unfortunately (or fortunately?) they didn’t find it.  Kevin is determined to find the thing.

One of the bunkers they explored

They met up with me at work and we went to dinner on Pier 39 at Wipeout Bar & Grill (just “okay” food, nothing to write home about…luckily I get a discount there because I work so close to the pier).  We then had a nice long walk along the piers and made our way to Ghirardelli Square so that Ashley and I could share a super delicious chocolate fudge/peanut butter sundae.  Mmm, mmm!

Thomas had to get an obligatory sourdough bowl and clam chowder; Kevin in front of the Chowder Hut

We had to drop those two knuckleheads off at the airport at 4:30 in the morning the following day (yikes!) but we wish they could’ve spent at least another day or two exploring the city with us!  Until next time (hint, hint!)  🙂