So what was the Christmas gift I told you I asked Kevin to get me? Well, if the title of this post didn’t give it away…my first tattoo!!

In 2006 on our honeymoon on the big island of Hawai’i we spent a lovely afternoon at Punalu’u Beach and I fell in love with the image below that was found on a monument describing the legend of the beach: 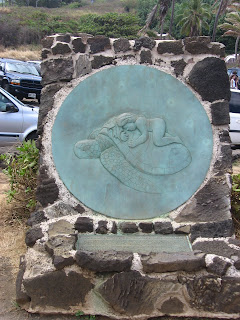 Legend has it that the mystical sea turtle named Kauila had the power to turn herself into a little girl to play with and protect the children of Punalu’u.

Since seeing it I knew I wanted it tattooed on me but never worked up the courage (or the funds) to go out and actually get it. A co-worker suggested the local SF shop One Shot Tattoo and I was happy with the reviews they had on Yelp. I still wasn’t sure, though, if I was brave enough to actually get it.

The following week I received an e-mail from one of those daily coupon websites (Homerun.com) which randomly had a 51% off a one hour session at that same exact tattoo shop I had been referred to! I knew I couldn’t pass up the amazing deal so purchased it right away in hopes that I’d work up the courage to actually set up an appointment sometime in the next week.

On Tuesday 12/28 Carleigh and I met up at Corona Heights dog park for a doggie play date and she suggested we just drop by the shop to get a quote and have them sketch it out…who woulda thought that I’d end up under the needle the same day! I’m happy I bit the bullet and did it that day instead of worrying about it all week (or month, or year!). It honestly didn’t hurt as bad as I thought (though the shading was the most painful) and I am so happy I got it! 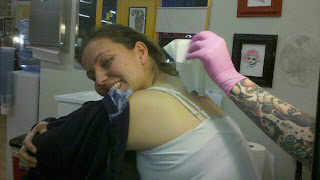 Yes, that is a genuine smile! 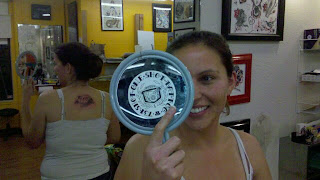 Seeing it for the first time (happy it didn’t turn out to be a flamingo like one of the other artists joked around while I was under the needle and said it was “an awesome flamingo”, haha)…so happy with it! 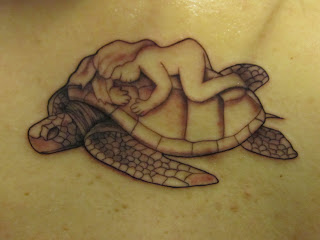 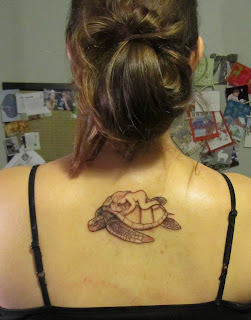 The healing process was quick and almost pain and itch free–it was pretty painful the first few hours after I got it but other than that it was like it wasn’t even there! I can’t wait for the warmer weather so I can show it off more. 😉