Lots and lots of baby updates this week!  We had our prenatal appointment on Fri, Feb 3 and we learned that, judging by the photos and measurements of our 20 week ultrasound, our estimated due date (EDD) has been pushed back just slightly to June 8 (up until then our EDD was June 6).  She’s a healthy size and weight and everything looks good so far!

We know and love so many people who have birthdays the first week of June (our good friend Brian: June 1, Kevin’s sister Judith & his late great-great-grandma Gladys: June 7, our good friend Erin: June 9, my late Uncle Bobby: June 10) so she’s got a good chance of sharing a birthday with some awesome people!!

This week I was able to get Sirena to cooperate and allow people other than Kevin to feel her kick!  The second person to feel her was my sister Jessie, then, during my 24 hour visit to Long Beach, my mom felt her and then our friend Brianne…so much fun!  Who’s next??

This past week was pretty rough for me in the sleep department and, surprisingly, it had little to do with my growing belly and the large mango I’m carrying around.  Our neighbors upstairs have consistently been extremely loud throughout the day and night and were finally kicked out by our landlord so they’re on their way out and will be gone at the end of February.  At the beginning of last week, however, I had three days straight of major stress over them–on Monday night they woke me up six times total over the course of the evening.  I called and texted the guy upstairs and did receive an apology the following morning but it didn’t keep them from having an argument at 11pm on Tuesday evening (after I had been asleep for an hour) and not only cursing at each other at the top of their lungs but also slamming doors in their apartment.  I grabbed our broom and banged on the ceiling three times which then resulted in one of them stomping on the floor back at me five times.  This was all happening, of course, while Kevin was still at work.  Added to the fact that my sleep was interrupted abruptly, I’m dealing with some intense pregnancy hormones which did not allow me to calm down easily.  I was not only wide awake for the next hour but I was seething mad, unable to just calm myself down (and Sirena was directly affected by it, she was kicking and punching me for 5 minutes straight so I knew she was also anxious and agitated).  The following afternoon, after a less-than-satisfactory phone conversation with the guy upstairs, I found myself at a major turning point….

I read an inspiring Buddhist quote (y’all know I’m Buddhist, right?) that quickly put things in perspective and helped me make a pretty huge realization.  The quote said, in short, that everything in our environment is a reflection of what is going on within–so my environment (the extremely rude people who were being inconsiderate and causing turmoil in my home) would only change if I made an internal change.

I realized that the only person on this planet right now that can protect Sirena is me.  And by allowing myself to be affected so negatively by the people upstairs, I was not only doing harm to myself but also doing harm to her.  I made the determination to not allow those people to occupy my thoughts anymore and it has done wonders for my ability to just let some of the noise slide.  Fortunately, they have been quiet during the middle of the night and I haven’t had any other issues sleeping through the night because of them! 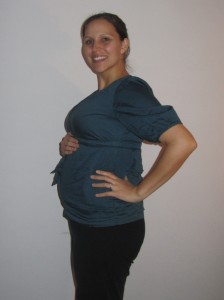 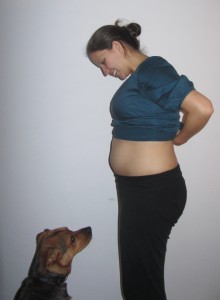 Lola did that all on her own! What a freakin’ cutie.