It’s official…we’re half way there!  Now that we’ve hit the 20 week milestone I feel like I can breathe a huge sigh of relief since there’s not as much to worry about now that we’re at this point.  And we’ve got so much to look forward to in the coming 4-5 months too which makes it that much better!

We had our big 20 week ultrasound on Tuesday and although it didn’t start off the way I had imagined, it sure ended exactly the way I had hoped…

I was sososo excited in the months and weeks leading up to the ultrasound but then that morning, I started getting nervous.  I was nervous that she was going to turn out to be a he.  I mean, please don’t get me wrong…I would love nothing more than having a son and would have been ecstatic if, at our 13 week ultrasound, we were told we were having a boy…but after 7 weeks of excitement over the news we were having a girl, I knew I’d be at least a little disappointed and I did not want to feel that way.  So that morning I was torn between being overly excited and nervous at the same time.

Kevin’s mom and sister Judith drove up over the weekend to spend a little time with us and to be present at the ultrasound which was a lot of fun.  We entered the room with the ultrasound tech and the first thing she said, without introducing herself or anything, was, “Well, it’s going to be little crowded in here”–I could tell from the tone of her voice that she wasn’t happy we were +2 visitors but I had called the office to confirm they were allowed so figured it was just her own issue.  Then she started asking me all of these basic questions that were already in my medical record and it seemed a little ridiculous and unnecessary to have to recall all of that information.  Then she got started on the ultrasound and we couldn’t believe that she wasn’t narrating anything she was seeing.  She kept looking at things and typing away and although we could figure out what some of her codes meant, it was weird that she wasn’t telling us exactly what it was she was seeing.  At one point Judith asked if what we were looking at was something and the woman just said, “No, it’s such-and-such.”  She seemed cold and uninterested in making it any sort of special experience for us and I was not happy in the least (comparing it with our amazing ultrasound tech at our 13 week appointment).  The one glimmer of humanness we saw from her was when she commented on the baby’s heart and said how “pretty” it was.

I tried to make the best of it, though, and we saw a really cool view of the baby’s legs all stretched out and super long and lean (at least we thought so, not sure if they’re really long compared to other fetuses at this age) and it was so cool feeling the baby move and kick as I saw it happening at the same time on the screen…so amazing!

Towards the end she asked if we wanted to know the gender so she took a look between the legs but told us that she couldn’t confirm 100% if it was a girl or a boy.  She said it looked more like a girl but couldn’t say for sure.

I felt so deflated at that point.  I did not want to leave that appointment feeling less certain about the gender than we did at our 13 week appointment, it just didn’t seem right!  But after getting a couple of photo print-outs and after she told us that was it, I didn’t feel like we could do anything more at that point. 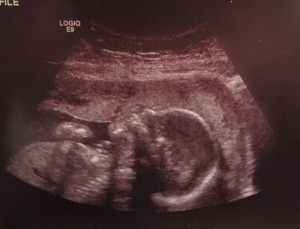 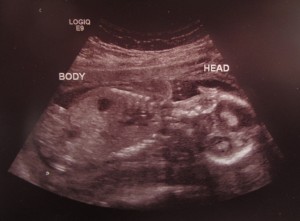 Baby got back! See the ear at the top of the head on the right?

She said she had to go talk to the radiologist to show them her findings and would be back shortly.  The four of us were left in the room and we were debriefing a bit…overall it was so great being able to experience the ultrasound with the family but Kevin agreed with me that the tech wasn’t nearly as good as the other one we met with and he was a bit disappointed with the experience as well.

When she came back she said that she forgot to do one thing so needed me to lie down on the table again to complete the ultrasound.  Another brief opportunity to see the baby?  Of course!!  After she finished her task I asked her if we could get a printout of the long legs we saw earlier.  She was trying to see if she could print out a previously saved picture but it ended up being a video she saved so she couldn’t print it out and had to go back in to see if she could get a good shot of the legs for us.  It was at that point that the baby decided to sit at the perfect angle for the tech to see clearly what the gender was and…it’s definitely a girl!!

The only time I will ever post a photo such as this of our child on the internet! Come to think of it, I’ll probably end up taking this photo down in a week or so, haha!

We were sososo excited to hear (and see!) the confirmation..exactly what we were hoping for!

One last piece of fun news this week before I end this ridiculously long post…Sirena’s been kicking me like crazy all week!  I feel her every few hours for about 10 minutes or so at a time.  She just moves around in there so much and it always makes me smile.  And the BEST part of it all…Kevin finally felt her move!!  Tuesday night I woke up when he got into bed after work and I was feeling the baby move so, for the thousandth time, I put his hand on my stomach in hopes that he’d feel her.  I’d ask him, “Did you feel that?” and he’d say “No”, then, “Did you feel that??” and again he’d say “No” but finally he felt a good jab!  Last night he felt her again and it just warms my heart beyond belief knowing that he can finally start feeling his little girl move.  🙂 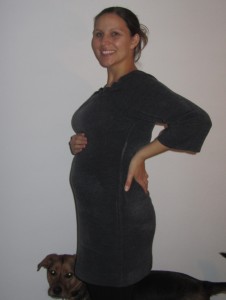 Lola was right in the middle of the mix with this shoot! Can’t blame her, she’s so darn cute and I’m sure she knew the blogging world wanted to see her, it’s been too long.

View more posts from this author
« Cities that start with an “S”
A baby story: Week 19 »