We’re officially at the half-way mark!  What an exciting time.  And an even more exciting time because this week we had our big anatomical ultrasound and found out that we’re having…drumroll please…another girl!!!  The ultrasound (u/s) tech lubed my belly up and basically as soon as she put the machine on my belly she asked us, “Are you interested in knowing the baby’s sex?”  This was vastly different from our big ultrasound with Sirena when we almost left the office unsure as to whether she was really a she or not.  So this little lady was rearin’ and ready (no pun intended, lol) for us to know right away! 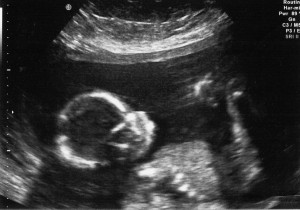 Pretty lil’ profile. She was gulping away in there, over and over again, it was so cute to see! 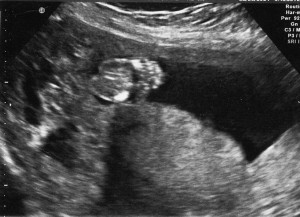 The u/s tech called this one “Hang Ten” (Can you see the bottoms of her little feet?? Looks like the Hang Ten logo.) 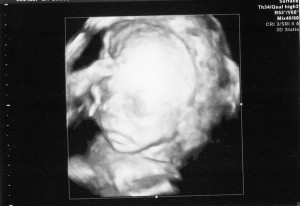 As soon as the tech told us that it was a girl I began to cry.  I would’ve loved to have a boy of course but the thought of Sirena having a sister…man, I broke down with tears of happiness.  My sister Jessie and I are super close and there is nothing in the world that could replace our relationship and what impact she’s had on my life and I hope that Sirena and this little chica can be just as close and me and Jessie.  🙂  And Kevin is thrilled to be able to continue to say “his girls” about me, Sirena, Lola, and now this little lady.  If we adopt another dog, we better make it a boy dog to balance the hormones in this house, haha!  And like I mentioned in my last post, Kevin and I aren’t sure if we’re going to continue to expand our family after this baby or not so who knows, maybe a little boy is in our future after all…

In true Lisa fashion we announced the baby’s sex at the Thanksgiving get-togethers for both of our families and caught them both on video.  Here is a link to a fun video of both announcements!

Another major milestone occurred this week: Kevin felt the baby kick for the first time!  We were lying in bed on a rare morning when Sirena didn’t wake us up first and as I felt the baby jiggling around I put Kevin’s hand on my belly and I was so happy that she gave an extra strong jab right then and there and he was able to feel it!  I told Sirena that she could try to feel it which she has now attempted on a number of occasions but she’s too spazzy and won’t keep still long enough to really feel it yet.  🙂

Lastly, this week baby girl #2 got her first gift from Aunt Juju and cousin Katelyn! 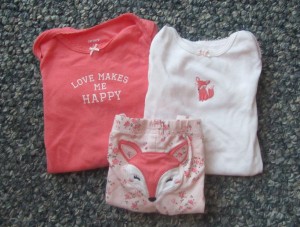 I can’t wait to see that diaper booty in those fox pants!

Week 21: Baby’s the length of a carrot

With all of the excitement of last week, this week really threw us for a loop with a real scare that almost sent me to the ER.  I am not the kind of person to go to urgent care/ER for any little thing (to be honest, I’ve never even been!) so when I thought I might be losing the baby and was advised by the on-call midwife to either go to the birth center or to ER right away, I was freaking out.  Luckily it happened on a day that I was working from home, Kevin was off of work, and Sirena was at school so we were able to get to the birth center right away without any issues.  And I am so happy and grateful to report that everything is 100% okay with the baby and with me and it was something completely unrelated to the pregnancy (and not a serious health issue I might add).

Those couple of hours before we really knew what was going on were terrifying.  I kept talking to the little lady, telling her that we would get through this together and that she had to be a fighter.  I kept feeling her move throughout the whole ordeal which I was hoping was a really good sign that things were going to be okay.  I hope to goodness that there are no more scares like this and that everything is as smooth sailing as they have been so far.  Man, being a mom and a woman is tough work, physically and emotionally!

The best part of this week has been how much more active she’s been lately.  I actually was able to see my belly shake from the outside which means she’s getting stronger!  Soon I’ll post a video of the belly shakes like I did during Sirena’s pregnancy.  Such a strange but cool experience!  Feeling the baby kick is by far my most favorite experience of both pregnancies.  <3

Baby girl is gettin’ serious in there!