Week 40: Baby’s the size of a small pumpkin

Lucia’s due date came and went and, strangely enough, as soon as April 15th was over I felt a ton less anxious about the pregnancy going on as long as it was. I decided to take advantage of the time Lucia was giving me to relax as much as possible (taking one nap a day…glorious), spending as much one-on-one time with Sirena as possible (picnic lunch at a new park, feeding the ducks at the duck pond), and walkingwalkingwalking as much as possible every single day (Lola was in doggy heaven!)

Monday, April 20 was the last full day of the pregnancy before labor began. We had what turned out to be a final prenatal appointment that morning and was met with the same disappointing news as last week’s appointment–I hadn’t yet started dilating and my cervix was still pretty high up. I got teary-eyed and the midwife was so reassuring–she said that as a second time mama things could change in an instant and that I was still just fine in terms of the length of the pregnancy and that she wasn’t getting worried yet so I shouldn’t be worried yet. Hearing the confidence she had in me gave me a ton of confidence and I left the appointment feeling hopeful.

Sirena was with Nani (my mom) that day and I was lucky in that both of my siblings randomly reached out to spend some time with me (they were in sync that day!) We went on a long walk with Lola and it felt great to catch up with the both of them. That afternoon when I went to pick up Sirena from my mom’s house I was given a really touching gift–my mom put on Bette Midler’s “Wind Beneath my Wings” and Sirena put on the most amazing interpretive dance the entire length of the song. I was so emotional listening to the words of the song and watching the innocence and the amazing way in which she expressed herself (and her kick-ass dance moves!) It was an incredible way to end the pregnancy and the era of Sirena being an only child. 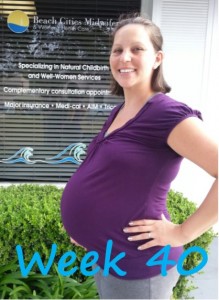 This final belly shot was taken on the last day of the 40th week of pregnancy, Lucia’s birthday (April 21). It was taken in front of the birth center only 4.5 hours before she was born!