Week 39: Baby’s the size of a mini watermelon

Like the past few weeks, this week has been quite the roller coaster emotionally. Each day I’m anxious about whether or not it’s the last day of the pregnancy and the logistics of getting Sirena situated with childcare and getting me and Kevin to the birth center on time, especially if it’s some crazy hour in the middle of the night. Towards the end of week 39 I was treated by my friend Kim to a wonderful prenatal massage which was downright heavenly. I also decided to treat myself to a manicure (something that I’ve done only a handful of times in my life!) and it felt really good to do these types of things especially so late in the pregnancy when so much of my physical/emotional/mental energy is focused on another living being (beings if you count Sirena too!) besides myself.

As I publish this blog post I’m actually at Lucia’s due date: April 15 (40 weeks pregnant to the day). It’s a bit surreal to be writing this post because never did I think I’d make it to her due date! Sirena was a week early and I thought that meant something but it obviously doesn’t mean much. Today we had our 40 week prenatal appointment and I was met with some less-than-stellar news after my internal exam: Lucia actually has not dropped like I thought she had a couple of weeks ago. She’s still pretty high up there and hasn’t dropped into my pelvis yet. It’s hard to believe because it feels like she’s sitting right on top of my lap when I sit down and I feel intense pressure on my bladder but my body just carries this pregnancy differently and the reality is that this girl ain’t quite ready yet. The midwife said that it could change at any minute especially for a second time mama but I was really hoping/expecting some better news (that she had definitely dropped and I had already started dilating). I have another prenatal appointment on Monday (40.5 weeks) for a non-stress test for the baby and to talk about possibly sweeping the membranes if we decide to go that route to help move things along. At our next visit we’ll also schedule a follow-up visit for that following Thursday to check on the progress of things. The midwife suggested some homeopathic tablets for labor preparation which I decided to try out and will be taking them twice a day until Lucia’s born.

Each night as Kevin and I put Sirena to bed I get emotional thinking about the fact that it may be the last time I kiss her goodnight before the craziness of newborn days begins and I’m no longer just mama to Sirena. I’m trying my best to enjoy each and every moment of our time together (tantrums and all, haha) because I know this reality is quickly coming to an end. Although the thought of her and Lucia being buddies and playing together and loving each other brings me so much joy, I know that the alone time I have had with Sirena has been so special and I wouldn’t trade it for the world. <3 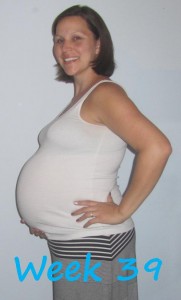