Lola, the newest homeowner on the block

So we’ve had Lola for 9 months now and we still hadn’t gotten her a dog house. 95% of the time it’s been fine but for those gloomy rainy days, we’d have to leave her inside while we were out. For the time Kevin’s been unemployed it would work out because he was at home until 2:30pm and then I’d be home at 5pm so it was only a few hours of being left alone. But two times in particular we’ve left her outside when we thought the weather was going to be fine and it ended up raining on our poor little girl (and one of those times it was hailing!). So now that Kevin got a job, we could finally seriously look into buying a dog house!

This morning I went on Craig’s List to see what was available. When I searched “dog house” in San Francisco, two popped up and one happened to be for a medium-to-large dog, they were open to suggestions for price, and they were in the Portola District (the same neighborhood we live in!) So I e-mailed him and he got back to me right away and we set up a viewing for 3:30pm. Turns out not only do they live in the same neighborhood…they live 5 houses away!!! So I literally walked down the street with Lola to check out the dog house. Amazing!

Luckily the dog house was just the right size and when I offered them $30 they accepted! I think it was meant to be. 😉 I spent a good 15 minutes in the backyard with her trying to get her into the house and after using the techniques that I learned from our dog training at the SF SPCA, now when I say “Go to your house”, she goes in and lays down! I should be a dog trainer.

So now Lola’s living it up in her new dog house! 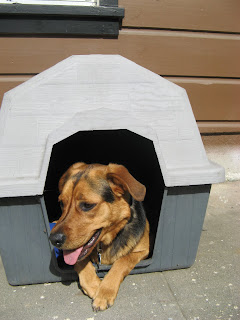 Don’t worry, she really fits in there. She’s just lounging in this photo! 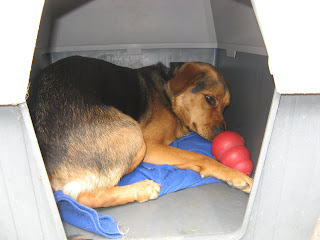 Positive reinforcement works, folks! Rewarding her for going in and laying down, then repeating. It’s not rocket science! 🙂 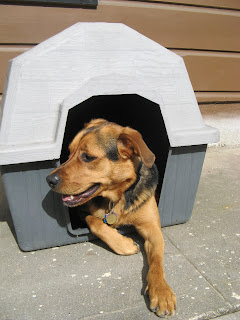 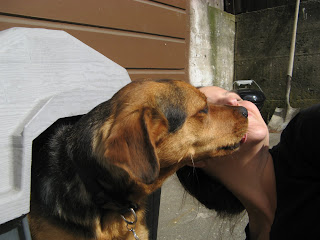 I tried to lay down next to her so I could take a picture with her head sticking out but before I could snap a good photo, she knocked me over with kisses! haha