Maya’s got one week left in the Bay Area 🙁 and I was so happy that she was going to be in the city tonight and wanted to spend some time with me! She’s been staying out in Sacramento with a friend so for the night she stayed in a hotel in Union Square because tomorrow’s the final walk-through with her former landlord. She checked in and I went up to see the room for a few minutes. The hotel is called Hotel Diva, awesome! It was a little out of control…they even had complementary “Diva” temporary tattoos! haha 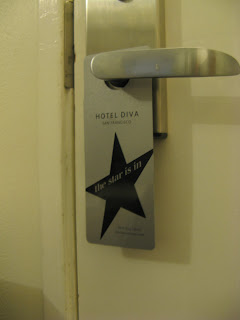 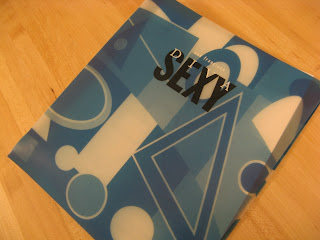 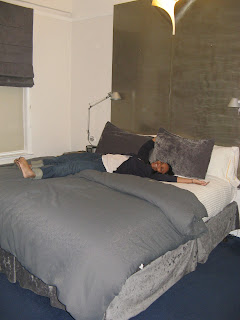 Maya was very excited about her King-sized bed 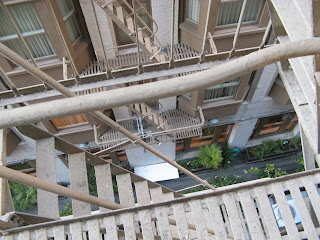 And I was a little excited about the fire escape that we had access to! 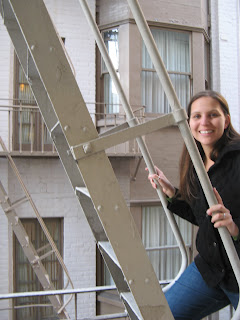 I felt compelled to ask Maya to take a picture of me on it. Don’t ask.

We walked through downtown for a bit and then decided to eat at a very high-class restaurant…Del Taco! Being from Boston and this Del Taco being the only one in SF, she had never been before! We used to talk about going there after work, so what better way to send her off to the East Coast than a trip to Del Taco? haha 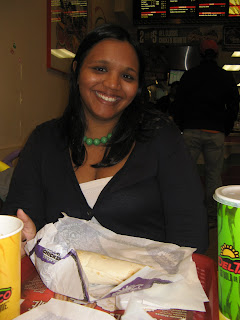 She’s only had Taco Bell in her life, so did I make a convert outta her?? You gotta ask her. 😉

We then decided to have a little bit of dessert and we enjoyed two choclate-covered and chocolate-filled eclairs from Beard Papa bakery in the Westfield Mall food court (that is the most posh food court I’ve ever been in!) The eclairs were nothing short of amazing.

I’m hoping to spend a day with Maya and her friend Katie out in Sacramento at Katie’s new apartment over the weekend, so check back for “Maya’s farewell–Part III” coming soon! 🙂

View more posts from this author
« Time travel on the cheap!
Lola, the newest homeowner on the block »

One observation on “Maya’s farewell–Part II”