Week 34: Baby’s the size of a Butternut squash

Sirena has really stepped up into the big sister role this week. She bought Lucia her first birth day gift (a cute little stuffed zebra) and she can’t wait to give it to her when she’s born and they meet for the first time. <3 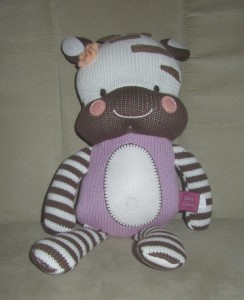 She told me, “I want to meet baby now,” this week and has been a bit impatient not knowing exactly when she gets to meet her. And this week Big Sister transitioned to a big girl bed! We would’ve kept her confined in a crib longer but we decided it’d be better for her to go through this major change now without the additional major life change of having a baby sister around.

Not much else this week in the baby department to be honest. A thought did cross my mind this week that I’m actually ready to not be pregnant anymore. With Sirena’s pregnancy I felt good through to the very end but this time around I just feel so much more physically strained and emotionally drained at times that I think I’m about ready for this chapter to be over (even knowing the craziness of life-with-a-newborn that is on the horizon!)

Week 35: Baby’s the size of a coconut

This week was super busy for us, namely because we co-hosted a baby shower at our house and built a playhouse for Sirena (and Lucia) in preparation for the party! So many weeks of planning with my friend Brianne were rewarded with a really fun and enjoyable celebration with our family and friends.

The theme was “Little Miss Sunshine” (going off of the Italian translation of Lucia’s name which is “light”) and we mainly used yellow/pink/orange colors through all of our decorations. 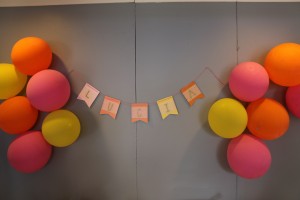 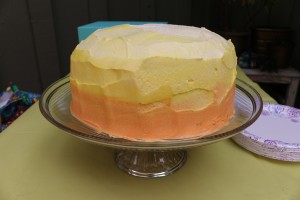 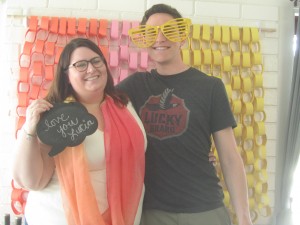 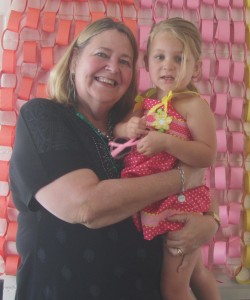 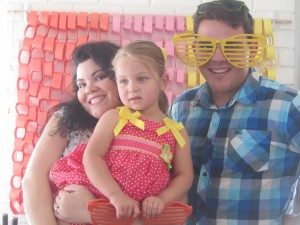 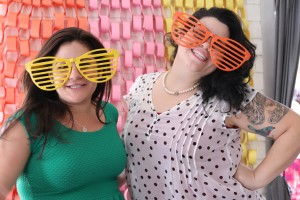 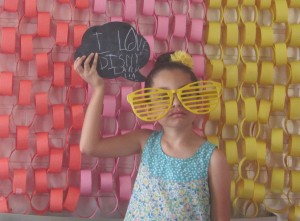 Sophie’s message to Lucia: “I love Disneyland” (Gotta love the mind of an 8 year old!) 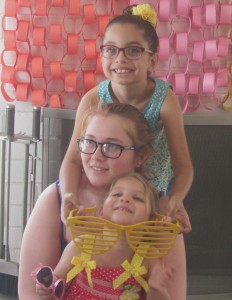 We played some fun (and hopefully not too cheesy) shower games: people wrote their “wishes for Lucia” on notecards and I’ll be putting them in her baby book. We froze tiny baby figurines in ice cubes and gave one to each guest to watch in their drinks while we opened gifts and the first three people whose baby floated to the top of the water were supposed to yell out, “My water broke!” And lastly we had people write messages to me and Kevin on diapers to entertain us during those middle-of-the-night diaper changes. Here were the three I chose as winners! 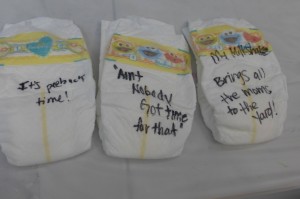 More photos of the party… 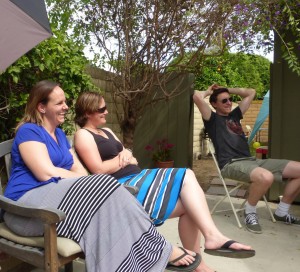 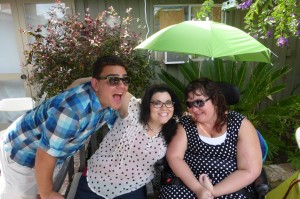 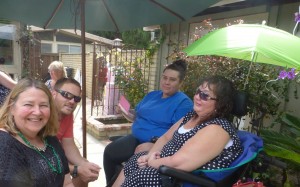 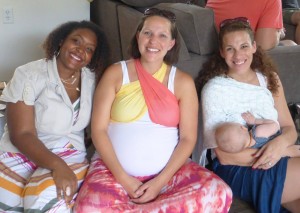 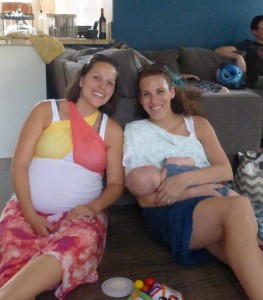 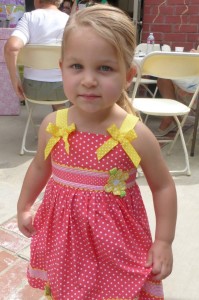 Our original ray of sunshine 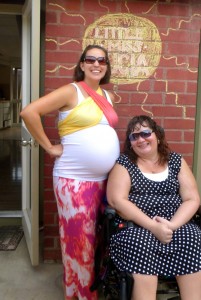 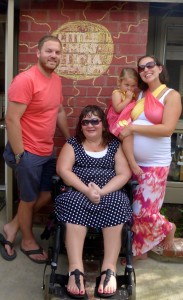 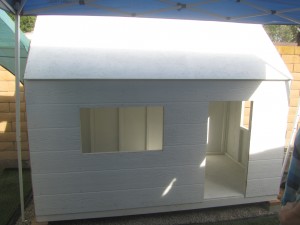 The play house! We’ve still got to paint it and put all the finishing touches on it but at least the floor, walls and roof were up in time. 🙂 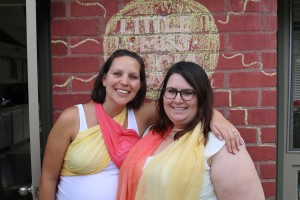 My partner-in-crime, Bri. I can’t thank her enough and this party honestly would not have happened without her! 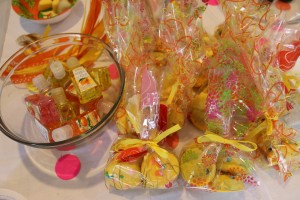 The party favors–citrus hand sanitizers and baggies of chocolate dipped Oreos. We also had a fun sun-themed craft and ribbon wands we made for the kiddos, I just forgot to take pictures of them! 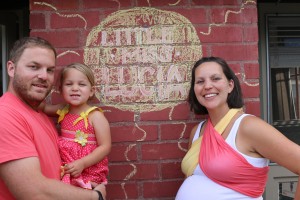 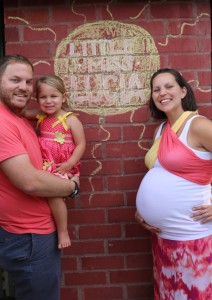 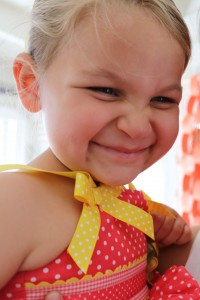 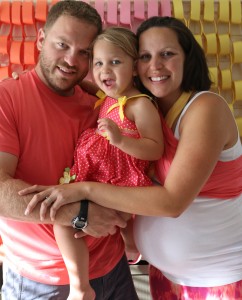 Even though this week has been the most stressful with work (preparing for my maternity leave) and preparing our house for the party (and not to mention hottest week in March EVER!) and even though by the time the party was over I was so physically exhausted, this week my thoughts on being pregnant have changed a bit compared to last week. I realized that this may very well be the last time I am ever pregnant and the last time I ever get to experience growing a life and being so physically connected to a baby and with that thought I determined to do my best to enjoy every minute of it. <3 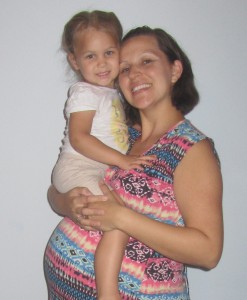 Really not too much to report this week in the baby department other than the fact that Kevin and I have gone into nesting overdrive! Our friends Celia and Chris gave us their old changing table and our friend Kim let us borrow her glider which prompted us to clean out our room, move our dresser into the closet, and make a little corner specifically for Lucia at least for those initial months of middle-of-the-night diaper changes and feedings. We still need a lamp and some baskets to put under the dressing table so that we can bring out all of the ridiculously small and cute baby clothes and start filling ’em up.  Sirena and I bought our first box of size 1 diapers (they’re so itty bitty!) so we’re ready for her to arrive any day now (but PLEASE don’t come this early, baby girl!)

This week Lucia seems to have turned the thermostat way up in this body of mine because I have been so overheated lately. I experienced the same thing during Sirena’s pregnancy around this time and it is intense! In addition to this typical third trimester physical change, I’m also experiencing crazy exhaustion again and a whole lot of uncomfortable pulling and tugging on my belly with the weight of this bundle I’m carrying. I can’t stand for too long without needing to lean over and relieve the pressure from my belly and it takes a lot to get comfortable sitting and laying down too. These adorable babies sure make their mamas work hard to meet them! 🙂 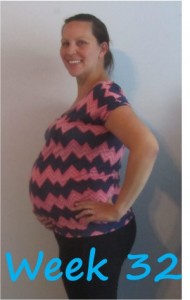 Week 33: Baby’s the size of a pineapple

Kevin and I started out this week with a prenatal appointment and everything is looking juuuust fine. My belly is measuring right on schedule and her heartbeat sounds perfect. My mom accompanied me to an event hosted by the birth center called “Meet the Midwives tea” which is an opportunity for all third trimester mamas to meet all of the midwives in case we hadn’t met all of them during our prenatal appointments. I’m really glad my mom was able to go and experience it with me because, like with Sirena’s birth, she’s going to be present for the birth and it gave her a great chance to have some of her questions answered and understand what to expect with a birth center birth (versus a hospital birth).

On a personal note, I realized that my stress levels were getting out of hand this week and that I needed to chill out not just for my sake but for Lucia’s sake too. Anyone who really knows me knows that I have to keep myself busy and I’m always gogogo. Even at almost 8.5 pregnant, I don’t keep myself from being out in the yard weeding, planning a baby shower, working full-time, all while doing my best to keep up with my busybody toddler Sirena. It came to a head this week and I basically had an emotional meltdown with Kevin which led to an increase in Braxton Hicks contractions–this really started to worry me as an increase in contractions are a sign of pre-term labor. I kept close track of them and they returned to the usual 1-3 times a day occurrence within a day which I was so relieved about. Even though babies born this early are generally healthy and turn out fine, she’s got a lot of major developing to continue in utero and I really hope she stays put at least until 37 weeks (I won’t be a candidate for the birth center before 37 weeks and will have to deliver at the hospital which is not something I am interested in doing again). I realized that I need to keep my stress levels in check so that she feels that my belly is a safe place to continue to be and grow in.

On a lighter note, I made some major developments in her nursery (I mean, corner-of-our-bedroom-dedicated-to-baby space). I pulled out all of Sirena’s baby clothes, washed her 0-6 mos clothes, organized them into the baskets under her changing table, and put up some artwork (the artwork wall is still a work in progress). 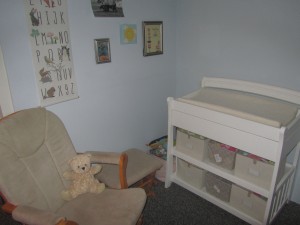