You have grown by leaps and bounds this month (I have a feeling I’m going to want to say that every month of your first year, but it’s true!)  We weighed you a few days ago and you were a whopping 17 pounds (you’ve more than doubled your birth weight…you and me are a good team, baby girl!)  Your hand/eye coordination is getting better by the day–you’re able to grab different toys and put them in your mouth (and sometimes your nose).  And in the last few days you’ve started to roll to one side and I’m sure rolling from back to stomach (or vice versa) is just around the corner.

The noises that you’re learning to produce are a hoot–your laughs are getting more and more pronounced as the days go by (sometimes they’re a squeak and sometimes they’re a “mmm” sound) and you make this hilarious, low grunting sound when you’re concentrating really hard on something (I can’t help but be reminded of Edward Scissorhands after he drinks orange juice, haha!)

This month has also brought on lots and LOTS of drool which can only mean one thing…teething is near!  You’ve also started chewing on your fingers which is also a good sign that teething is beginning.  It can still be months before any tooth actually breaks through but your body is preparing itself for that time which we are so looking forward to (ha, yeah right).

The last two weeks have been rough in the sleep department.  We were doing so well with you only waking up twice to eat but lately you’ve been waking up 3-4 times a night because you’re hungry or just fussy.  It reminds us of the sleepless newborn nights and we’ve heard that this is a typical phase 4 month olds go through so we’ve got our fingers crossed that the end is near.  It’s kind of funny the way you start stirring in bed–instead of whimpering or crying like you used to, you start grunting as you pull your one arm out of the swaddle and then you start thumping your heels against the bed over and over again.  In addition to laughing at your quirky ways at 2am I have to remember to see the positive in these sleepless nights–when we’re sitting there in the dark room after you eat, there truly is nothing more amazing than the deadweight of your little body laying on my shoulder as I rock you to sleep. 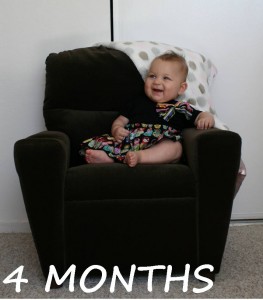 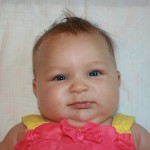 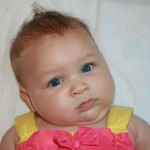 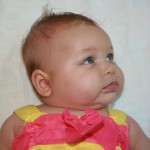 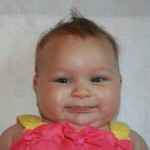 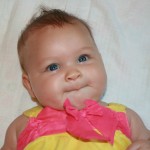 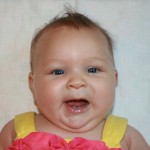