There are so many new things that you are learning every day and it just blows me and your Daddy away how much you soak it all in like a little sponge.  Your love for airplanes, helicopters, buses, and trucks has truly blossomed this month and it is so neat to see how much joy those big machines bring to you!  Every time you hear an airplane you point up in the sky and search for it and that could not make your Daddy, the-airplane-mechanic-who-runs-out-of-the-house-every-time-he-hears-a-jet-fly-overhead, happier.

The sweetest moment happened last week when I picked you up from daycare–it was a Tuesday afternoon, trash day, and you started shaking and made a “hmm” when you saw the big recycling truck approach so I decided to pause and let you watch it do its thing.  You watched in total and complete awe as the big mechanical arms came out and picked up the recycling bins and dumped their contents into the back of the truck.  Then when the truck approached I told you to “Say hi” and you waved and then the driver excitedly waved back at you and honked his horn which made you so happy!  It was such a neat moment and you seemed to have both made each other’s days.

I can’t wait to see what your interests are…if you’re going to be a little scientific, mechanical thinker like your Daddy or someone who loves art and the humanities like your Mama.  Heck, why not both?  We don’t want you to ever feel limited in what you can do and feel passionate about. 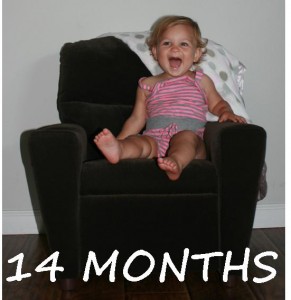 See past monthly photos in her mini armchair here: