Now that we’re officially into the second trimester I’d like to post once a week with an update about me, the baby, and our little growing family.  This 13th week started off better than I could have imagined: two ultrasounds AND we found out the baby’s gender!!  But you’re going to have to be patient before finding out (or just scroll down, haha).

Yesterday we spent the better half of our day in the doctor’s office for two appointments.  Our first appointment was the basic prenatal checkup.  The doctor attempted to listen to the baby’s heartbeat using a doppler machine but the little bugger was hiding so she had to get the ultrasound (u/s) machine out.  She moved the machine around my abdomen a bit and for a minute or two we didn’t see anything.  She asked us how far along we were at our last u/s and I was getting a little worried because we weren’t seeing anything.  Then, after pushing down pretty rough on my lower right side…we saw a little fish swimming around!  The little thing was moving around so quickly and we could barely get a look at it…but it was there, and alive!  🙂

In the afternoon we had a second appointment but this time it with the genetics department for a nuchal translucency u/s (to test for genetic disorders like Down Syndrome which, we were told at the end, we have very little chance of).  The u/s tech was amazing: she was so sweet and kept saying how “cute” our little baby was and talking to it like it was right there in the room with us.

It was amazing seeing how much growth the baby had done in the five weeks since our last u/s.  The baby has grown from 0.6 centimeters to a whopping 3 inches…from the size of a raspberry to the size of a peach!  It’s still hard to believe that one day not too far in the future the baby will be the size of a watermelon…while in my stomach!  Let’s just take it one little piece of produce at a time, shall we? 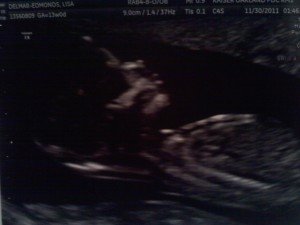 The head (the big round thing on the right) and arms 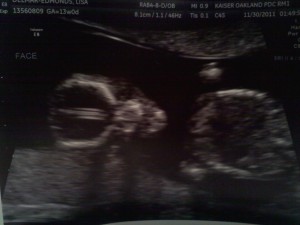 The face (the doc called this one “Skeletor”)…kinda creepy! It’s because the skull hasn’t formed completely yet.

And then to our surprise she gave us a 3D view of inside my belly to get a better look at our little bugger…it was INCREDIBLE the kind of detail we were able to see so early on in the pregnancy! 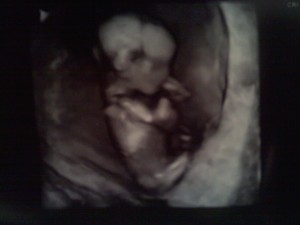 And the very best news of the day…she asked us if we wanted to know what the gender was.  And we did (of course).  So she said, with 85% certainty she believes we’re having a…girl!

Our photogenic little model…or hula dancer…or electric slider (a few things we heard after posting this photo on Facebook, haha!)

That last photo is my favorite of all.  At first when the doc turned on the 3D, our little girl had her back towards us so she said “Cough, mama” and I coughed and the baby moved around a bit!  But she only moved enough to see the other side of her pretty little backside so the doc had me cough three other times and finally we got a view of her pretty little face.

Ask and ye shall receive.  Just this week I’ve had to add a little something to my jeans so that I can still wear them comfortably.  I’m nowhere near buying maternity pants (or at least I hope not) but I definitely can’t go around in my jeans buttoned up like normal.  I think to most people I just look a bit chubby.  😉

Here are a few belly shots (and you can see big sister Lola just had to take part in the photo shoot too): 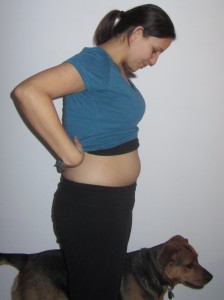 She’s in there somewhere! 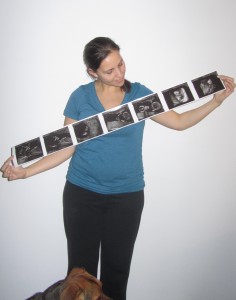 So what names do we have picked out?

This is one of the first questions I get asked after people find out I’m pregnant and especially now that we know it’s a girl I can only anticipate to be asked this even more.  We’ve had a girl’s name for a looooong time (I’ve been thinking about it since I was in college, no joke!) and so we’re happy to announce that in June 2012 we’ll be the proud parents of…Sirena!  In Spanish, Sirena means “mermaid” and it will be pronounced like the more commonly spelled “Serena” (or when she’s in trouble I’ll pronounce it in Spanish, heheh).  The middle name’s a secret for now, though.