Week 26: Baby’s the size of a head of lettuce

A lot was going on in Lucia’s world this week, namely, opening weekend for her Nani’s play “Shadows”! I helped produce the show, Uncle Derdo directed and was the lead male actor in the play, and Nani wrote the play, was the props master and costume director, and produced the play so it was a wild time for our family the past four months and we were so excited (and relieved!) to finally see opening night arrive and go over so well. Seeing the play again after 15 years and being in such a different place in my life (I was in high school the last time the play was produced), I was overcome with pride in my mom and in my family. It means so much to me that because of my mom, not only do I have some amazing stories of my family that I otherwise would never have known but I also have it in a visual performance where my family members, some of whom I never met, really came to life right before my eyes. Means the world to me and hopefully will be treasured by Lucia, Sirena and any other kiddos we might have in our family. 🙂

Now back to Lucia: I’ve come to the conclusion that this little girl moves a LOT more than Sirena did when she was in my belly. Lucia jiggles my belly around all day long and gets me with some major jabs and belly rolls a few times a day. I have yet to catch it on film (I need to keep our camera handy!) but hopefully soon. She also seems to stick around reaaaally low most of the day and night. It can feel really uncomfortable where my pants rest on my low abdomen and I find myself having to resituate myself (or my waist band!) to get some relief from her pushing down.

I’ve also noticed that clothes do not fit me the same as they did with Sirena’s pregnancy. It’s obvious that my belly has grown a lot more quickly this time around but even shirts and leggings that I wore through to the end of Sirena’s pregnancy (when I was a lot larger than I am now) just aren’t fitting the same even now. I’ve had to purchase a few more maternity shirts and a new couple of pairs of stretchy pants to feel more comfortable on a daily basis. Hopefully these will last for the next 3 months!

The only other news with the pregnancy is that so far I haven’t developed linea negra (a brown line from navel to top of pubic bone that is temporary) like I did during Sirena’s pregnancy by now and so far I’ve still got an actual belly button! It’s becoming more and more shallow by the day so I think its days are numbered. 😉

Week 27: Baby’s the size of a cauliflower

We started off this week with a prenatal appointment. We met with a new midwife, Vicki, so it was nice to be able to get to know another midwife who may end up being the one present at our birth when the time comes. The ever-exciting glucose screening was at this appointment and a few days later I received the same potentially disappointing news that the test levels came out a bit high and so I’ll need to go in for the longer 3-hour glucose screening next week. Fingers crossed I’m not diagnosed with gestational diabetes but of course we’ll face that if it comes to that!

Things are starting to get more and more real with the impending birth and arrival of Lucia…the midwife talked to us about preterm labor signs and starting next week I need to start keeping a kick count (to make sure she’s keeping active throughout the third trimester). Third trimester starts next week…ahhh! So much to do and now it’s really getting to be crunch time.

Fun fact: Next week during Sirena’s pregnancy is when I chopped all my hair off. I’m considering doing it again…guess it’s a third trimester pregnancy thing?? 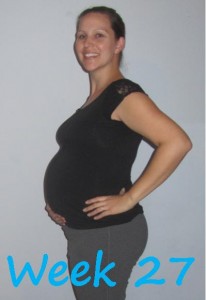 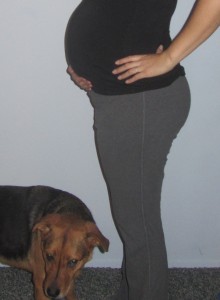 My shadow seems to have returned!