The Buddhist organization that I was born-and-raised a part of had the very lofty goal of hosting three youth-led festivals collectively called “Rock the Era” throughout the United States in the month of July and I was lucky to be a part of the movement. The western states were preparing for a youth festival scheduled for July 10th in Long Beach, so I was a part of the San Francisco youth and I decided to help out with the theater group. The theater group was 21 strong and most of the kids in the group are high-school age so it’s been great “practice” for when I am a teacher. They’re a really great group with tons of energy and we have a lot of fun at practices. So in preparation for the July 10 festival, we were practicing twice a month for 4-6 hours at a time and having a great time while doing it. 🙂

Most of the youth from outside of Southern California either went down to LB by bus or plane but because I’m from LB I decided to make a little trip out of it. So on Wed. 7/7 I jumped in my car at 6pm and made the drive down to LB, getting in around midnight.

Before I go into what I did during my time in LB I thought I’d mention that Thurs. 7/8 was actually me and Kevin’s four year anniversary (!) and unfortunately we weren’t able to spend the day together! But we promised to celebrate when I got back to SF. This last year has been one of the happiest for the two of us and I find myself filled with so much appreciation for Kevin. He is a great husband and we’re a great team and I love him so so much! 🙂

Okay, back to the events of the week… 🙂 That Thursday I decided to take as a remote working day, so I was glued to my laptop at my mom’s house during the day which wasn’t super fun. But my friend Kim dropped by and made me some delicious vegetarian Indian food for lunch!

Friday was the all-day rehearsal at the Long Beach Arena getting us prepared for the festival the following day. I was at the Arena at 8am and we didn’t leave until 8pm. That night my sister had a little get together at my mom’s so it was great seeing some old family friends.

After an all-day rehearsal and a late night I think saying that the next morning when I woke at 6am being tired was somewhat of an understatement. The rehearsal that day started at 7am and went straight through to show time at 2pm. There were so many great performance groups: taiko drums, gymnastics, hip hop, spoken word, contemporary dance, rock band, and not to mention the theater group! 🙂 The show lasted 2 hours and there were 20,000 people in attendance and performing/back stage–youth filled the entire LB Arena! It was pretty remarkable and extremely inspiring seeing all of these youth working together for world peace.

After the show I met up with Jessie and our old family friend Molly Scarpine who I hadn’t seen in years–we had some dinner and drinks at Rock Bottom and then met up with the Mitchell family in Naples.

The next morning after a visit with my Aunt Tina I jumped back in my car for the 6.5 hour drive back to SF. It was a really great, inspiring trip and it felt great to see all of our months of hard work worth it in the end with the great performance! 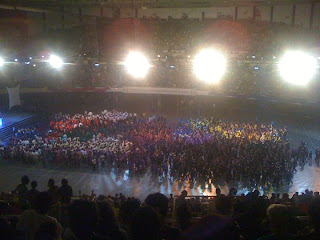 All of the performers on stage for the finale–I’m in there somewhere! 🙂