Two of my former co-workers from the Girl Scouts, Wendy and Rose Mary, had told me when I shared the news that Kevin and I were moving up to SF that they were planning on coming up to see a SF Giants game and it happened to be during my third week here. The most amazing part of it all was that Wendy’s husband Bill was initially supposed to go but had purchased tickets for the Angels vs. Yankees game in Anaheim for the same night, so they had an extra ticket and let me come along! 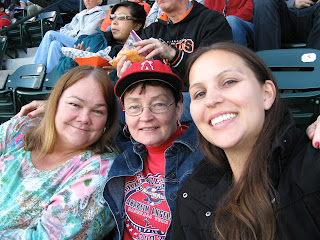 Wendy, Rose Mary and me

I’ve never been a huge baseball fan, but seeing a game at AT&T Park with its amazing views of the bay really made a fan out of me! 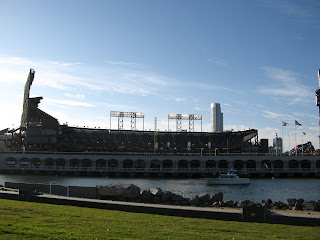 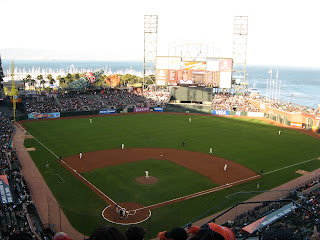 And not only was it a great game because the Giants beat the San Diego Padres 8 to 0, it turned out to be an historic Giants game that night! It was the Giant’s first no-hitter game since 1976 and we were there to witness it.

One of the funniest things about the night was all of the attention that we got because of Rose Mary’s Angels gear she had on. We got boo’d at a few times and one guy actually asked if she would take a picture with him! Sorry for the poor quality, I was laughing too hard as I took the photo! 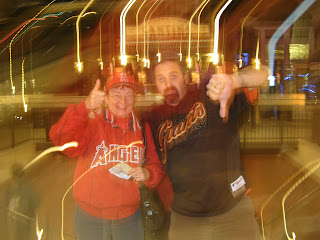 After the game we met Kevin and our friend Emily at Lefty O’Doul’s pub in Union Square and joined the other Giants fans. It was so much fun reuniting with Wendy & Rose Mary and I can’t thank them enough for the free Giants game and the great company! 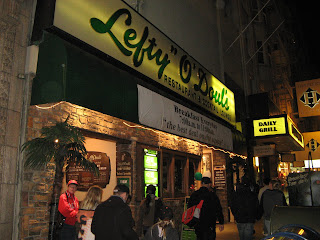 One observation on “My first SF Giants game”