Lola’s visit to the vet

Last week I noticed something just above Lola’s right eyebrow.  At first I thought it was sap or something sticky that got caught in her fur but I wasn’t sure if maybe it was an actual bump.  I asked Kevin to look at it and he confirmed it was some sort of bump.  A couple of days went by and the bump seemed to be growing pretty quickly!  We fussed around with it and it didn’t seem to hurt her at all so we weren’t sure what to make of it.

Kevin, being the good daddy that he is, took her into the vet last Tuesday to get it checked out.  The vet knew right away what it was…

The nasty thing bit her on her eyebrow and was growing by the day.  I am grossed out just thinking about having touched it and messed around with it.  Yuck!!

They removed the damn thing and she’s got a little scar to show for it, hopefully the hair around it will grow out soon so it won’t be noticeable anymore.

The one other thing that came out of this whole ordeal was that we learned she’s about 8 pounds overweight!  Poor little thing.  Kevin called it the week before, actually.  He told me he thought she didn’t look as defined as she used to in her mid-section.  Now she’s on a diet, only getting one scoop of food for breakfast and one for dinner instead of the 2 cups we’d give her at each meal.  Every night I feel so terrible because she licks her bowl after the food is all gone, just begging for more food.  It breaks my heart!  But the vet says that soon enough she’ll get used to it and slim down.  Our goal is to get her back down to 50 pounds even.

Here’s a cute photo of our little patient for your viewing pleasure: 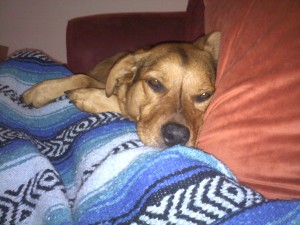