Week 29: Baby’s the size of a butternut squash!

Lots of baby news this week (seems like it’s been that way for a few weeks now…we’re definitely on the home stretch!)

We had a few special visitors in town–Brianne and Brian drove up on Friday afternoon and spent a couple of nights with us.  The majority of the time was spent getting some good quality time in with each other at our place but we also did a few fun outings including: seeing “The Hunger Games” (so good!), getting Indian pizza for dinner in the city at Zante’s, enjoying some Salvadorean pan dulce (sweet bread) at Rico Pan (a bakery we used to frequent in our old ‘hood in the city), a quick hike in Piedmont Park followed by awesome sandwiches for lunch at Ike’s Lair (the East Bay’s version of Ike’s Place which was featured on that show “Man vs. Food”).  Can you tell we like to eat?  🙂

We didn’t let the rainy weather get in our way of enjoying the weekend!

B & B at Piedmont Park (check out Lola’s photo bomb, haha!)

After B & B went on their merry way back down to Long Beach, Kevin and I trekked across the bridge once more to visit with my dad who was in town.  We were only able to spend a short amount of time with him but it was really good seeing him and I know he was excited to see the belly that is home to his first grandchild!

This week I also had my appointment with the dietitian due to my having developed glucose intolerance.  I’ve know for a couple of weeks now and had already adjusted my diet (no more cookies/cake/ice cream for me, boo!)  One thing I didn’t realize was that my diagnosis has nothing to do with what I’ve been eating this whole pregnancy, it’s just that some women’s bodies don’t process insulin properly once all of the pregnancy hormones are added into the equation.  So it was definitely a minor relief knowing that it wasn’t something I did to cause it.  I also brought a list of some of the common foods I eat for breakfast/lunch/dinner/snacks and she was pretty pleased with my diet which made me happy.  I have to actually up the fats (avocado, nuts, olive oil) and just monitor the carbs I eat throughout the day and make sure that I eat every three hours to stabilize my blood sugar.  But overall it was a good appointment and luckily I don’t have to make too many adjustments to what I was already doing these past two weeks.

We also took a huge step and interviewed and hired a doula!  She and I have been speaking over the phone and via email the past few weeks and we finally had a chance to sit down and meet with her at our apartment.  She was very easy to talk to and we both felt very comfortable in her presence.  She has a lot of great experience (having even been present at 6 births at the Kaiser Oakland facility we’re going to have Sirena at which I think is a big plus) and she is going to be a really great addition to our little birth team.  We’ll have three visits with her before the baby arrives, then she’ll stay with us throughout the labor and up to a couple of hours after she’s born, and then she’ll meet with us twice postpartum.  I wrote a little more about the reasons we want to have a doula present at our birth on this post if you’re interested in checking that out.

This week I’ve started keeping track of Sirena’s movements on a kick count chart (kinda like this one).  It’s suggested that moms do this in the third trimester to monitor the baby’s movements and just make sure that they don’t decrease at all.  I have to count to 10 kicks/movements within an hour and so far she always gets to her 10 kicks within 25-30 minutes…this girl likes to move!

And lastly, although zero progress has been made on the nursery (due to the leak that we are continuing to battle with, we’re going on 10 weeks now!!), I am happy to say that one of the crafty projects I’ve had my mind on for a while was finally tackled and accomplished.  I wanted to do some hand-lettering and write out the literal translation of her name (Beautiful mermaid of the Edmonds Sea) and here’s the final product:

Framed art for Sirena along with the newest teddy bear that Brianne got her! 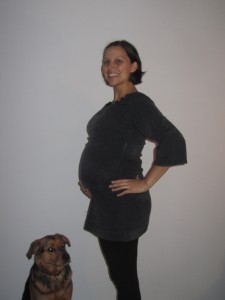 I noticed I wore this same outfit in my Week 20 belly shots, check out how much the belly’s grown since then (she’s grown from a banana to a butternut squash since then…and it shows)! 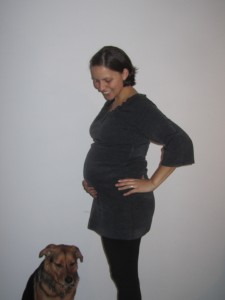 My little furry girl wanting to get in on some of the belly shot action again this week!

View more posts from this author
« Babymoon in Sonoma
A baby story: Week 28 »