Week 30: Baby’s the length of a cucumber!

We’ve kept ourselves mighty busy this week, most notably with our babymoon to Sonoma County over the weekend!  But baby’s been making a point of not letting us get too distracted and has made her presence known very well.  In addition to being woken up in the middle of the night to use the restroom and to stretch out my legs due to crazy muscle cramps, I found myself woken up on Monday night by what I believe was my first case of Braxton Hicks contractions!  It felt a lot like menstrual cramps which I’ve been told is common and once I changed positions it stopped so I’m fairly certain that’s what I was experiencing.  It gets me excited thinking about how my body is beginning to prepare for the big day!

She’s also been making her presence known quite well with the frequent case of hiccups she’s been getting!  It’s just a slight movement I feel every few seconds that continues for a couple of minutes so I’m pretty sure that’s what she’s doing in there.  Kevin was actually able to feel the hiccups which was really cool.  And I think she’s gotten herself into the correct position (head down at least) because when she’s got the hiccups I feel the movements in my lower right abdomen.

We had our prenatal appointment last Thursday and things are looking just fine.  We heard her heartbeat again and this time it sounded something like a tiny dog barking!  I guess she’s going to take after her big sister Lola after all, hahah.  I asked our OB/GYN about the rib pain I mentioned in last week’s blog post and she said that it shouldn’t be anything to concern myself about but then over the weekend it started to feel a little worse.  I called the appointment center to make an appointment later this week but the nurse on-call advised that I see a doctor right away and I was seen that afternoon instead (Tuesday).  The doctor is fairly certain it’s not actually my ribs (good news) but he’s not sure what the issue is, although he thinks it might be an inflamed muscle.  He called the perinatologist on duty who advised that I take Motrin (ibuprofen) every 8 hours for two days to see if the pain/inflammation goes away.  And if that doesn’t work then he advised that I go in for x-rays (to rule out a fractured rib which he really doesn’t think it is anyways).  I was in the office when the doctor I was seeing was on the phone with the perinatologist and the doctor had said twice, “Are you sure?  She’s pretty far along and I normally don’t advise ibuprofen/x-rays at this stage,” so when he got off the phone and advised that I do those two things I was hesitant and he definitely noticed that so said that it’s ultimately my decision and to do what I feel most comfortable with.  I talked with Kevin about it that night and after doing some research on the potential harm that can come from a mom taking ibuprofen during the third trimester, I decided to stick it out for a little longer to see if it clears up on its own.  The pain is only bad when I take a deep breath, cough/sneeze, or when I lay on it funny so it doesn’t interfere with the majority of my day, luckily.

In non-baby-related news…we’ve got two new roommates for the month of April!  My sis Jessie is back from her yoga teacher training in Colorado and she and her little boy (Mars, my nephew the kitty!) are staying with us for the month.  Mars and Lola have been doing really well together and we’re pretty confident that they’ll be best of friends by the time they leave.  Also, this week the school I’m student teaching at is on spring break so I’ve gotten a nice little break from my crazy teaching/work schedule.  I’m trying to use this time wisely, though, to plan ahead as much as possible because starting next week and for the next 5 weeks I’ll be taking on a lot more responsibility for the class.  May 10 is my last day with the 7th graders and I’ll be officially done with student teaching at that point…I’m so close!  And lastly, last Friday (March 30) marked my one year anniversary of being pescatarian (think vegetarian that eats seafood)! 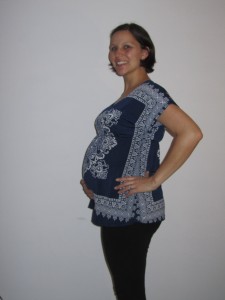 No Lola photo bomb this week!

View more posts from this author
« A baby story: Week 31
Babymoon in Sonoma »