The weeks seem to be zooooming by now that we’re getting so much closer to the due date!  A LOT has taken place in the last week and it feels good to be getting so many things done in the baby department. But before I get to that I just need to shout at the top of my lungs that I AM OFFICIALLY DONE WITH STUDENT TEACHING!  Friday was my last day with those 7th grade knuckleheads and although it’s completely bittersweet since I enjoyed my time with them so much, it is such a major relief to be done and only have to work full-time for the next few weeks.  😉  I want to write a post reflecting on my experience once my credential course and my CA state assessment are done (should be all finished up with everything next week) so I’ll leave it at that for now.

This week Kevin and I did some major work on the baby’s room and it’s coming together quite nicely!  The fire was under our rears because our Bay Area shower was being hosted at our apartment so we worked from early morning hours both Saturday and Sunday to get the room and the entire apartment in tip-top shape.  We’ve still got some work to do on the baby’s room but we are almost done!  Here are some sneak peek photos of our progress so far: 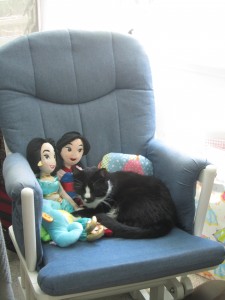 Mars relaxing in the glider we got from Craig’s List!  We’re going to dye the fabric a dark brown but this is what we’ve got for now. 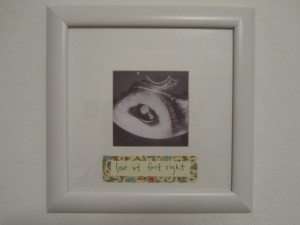 Here is a little something I made for her–a picture of our very first ultrasound at 8 weeks (seems like a lifetime ago!) with the words “Love at first sight” written on the bottom. 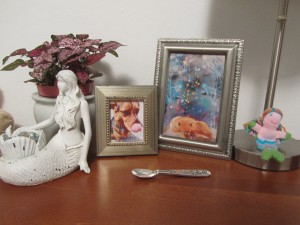 The top of her dresser/changing table with another plant, her mermaid candle holder from my mom, an art print of a bear + constellation, a little mermaid finger puppet from Jenny and Neil, her first spoon with a little mermaid on it, and last but certainly not least–a framed picture of her big sister Lola!

We went to IKEA and purchased two bookshelves to begin her little library.  Here are some shots of some of the shelves: 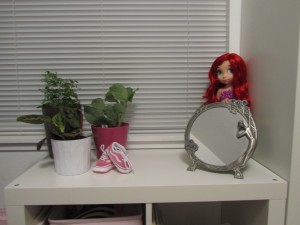 The top of the bookshelf with some flowers, her cute little Vans shoes (courtesy of Kim and baby Amelia!), her Ariel doll (one of four Disney dolls my Aunt Tina got us for our shower last week!), and a mirror I purchased years ago at an antique store 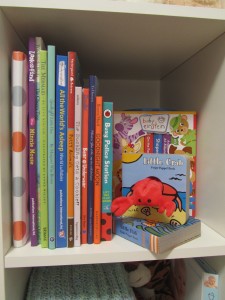 So many good books!! 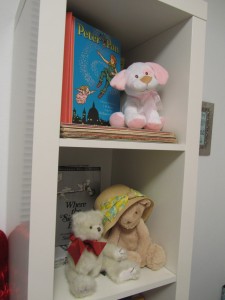 Two of the shelves with a Peter Pan pop-up book that mama and daddy bought for her months ago sitting atop a stack of children’s story/song records from the 60s we scored for cheap during our babymoon, and the second shelf has her Shel Silverstein book collection (we received Where the Sidewalk Ends from her Aunt Judith, A Light in the Attic from Jayme, and The Missing Piece Meets the Big O from Kim, Frank and Amelia) and two cute teddy bears (one from Steve and one from Brianne and Brian wearing a cute little hat from Lisa and Josh)! 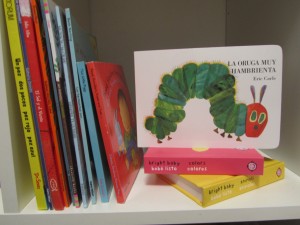 She’s already got a shelf dedicated to her bilingual English/Spanish books!  I only told one person that I wanted to get some bilingual books but quite a few people thought of it on their own and I am so happy they did!  Kevin’s looking forward to practicing his Spanish with her too.

We had a great time at our Bay Area shower and we can’t thank Carleigh enough for throwing such a fun party for us!  We had around 17 people there total and Lola and Mars were the perfect hosts.  🙂  My mom and her boyfriend Steve crashed the party and surprised us that afternoon, here’s a link to a fun video she put together of their sneaky plan to surprise us. And here are some photos from the afternoon (courtesy of my mama):

One of the games Carleigh had the guests play, they had to create a baby out of Play-Doh and I chose the one that I liked the best! Some very interesting creations here… 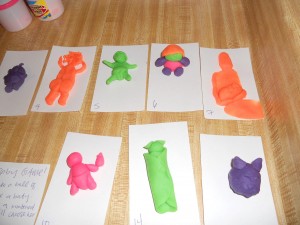 The pink one on the bottom is the one I chose (Carleigh’s)! 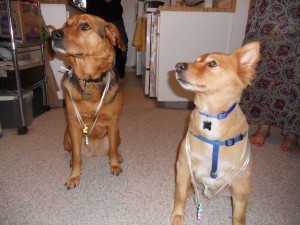 Second and third place winners for the other shower game 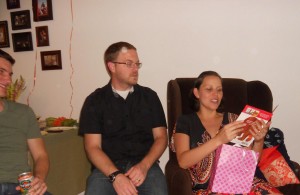 Me and Kevin opening up some gifts. We were reading a super sweet poem written by our friends Terri and Scott that was inscribed in the inside cover of the book.

Some of the party guests + doggies 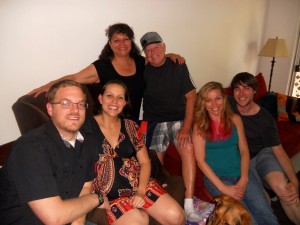 Tonight I was treated to an amazing prenatal massage and it was so appreciated.  Our doula is a massage therapist and I had been looking forward to this massage for weeks! This one was included in our package we got from her and my mama bought me a few more to take advantage of before and after the little miss arrives.  THANK YOU mama!  It was beyond relaxing and I feel like I’m on cloud nine right now.  🙂

And last but certainly not least today we had our 36 week prenatal appointment.  It was a little stressful because our OB/GYN’s office called me yesterday afternoon letting me know that she was cancelling all appointments for the rest of the week, including ours.  Kevin and I had been looking forward to seeing her one last time today and I was definitely upset by the news.  Luckily this morning I was called with some good news, that another OB/GYN had an opening to see us at 11:30 so we were able to have our appointment after all!  The doctor was able to confirm that Sirena’s head is down (woohoo!) and although the ultrasound was short and sweet, we were so happy to see her little arms and fingers and long legs stretching out.  The funniest thing was that the doctor could tell that her bladder was full, haha.  The picture we got wasn’t the best but I thought I’d put it here anyways just for posterity’s sake.  🙂  This is a picture of her pretty lil’ head: 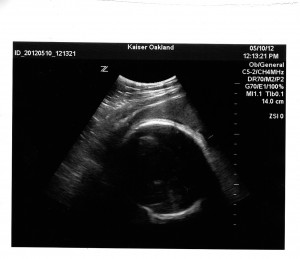 The doctor said her head is nice ‘n round! 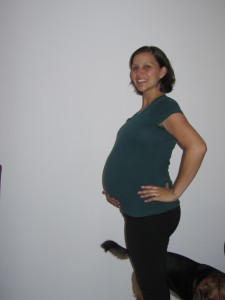 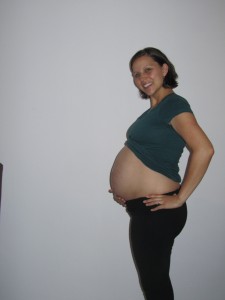 Can you tell how much more relaxed I am after my prenatal massage? Ahhh… 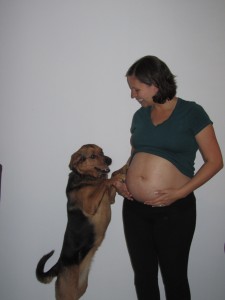