Week 18: Baby’s the length of a bell pepper!

I can’t believe it…we’ve made it to 4.5 months!!  So many people have told me that it goes by so fast but I have to admit, it’s been going by fairly slow so far.  I think all of the worrying the first 3-4 months really made things drag on a bit.  I’m kind of a worrywart all on my own but with a little peanut-sized baby in utero and so many unknowns for so long, it started to get the better of me at times.  Even though the first trimester has come and gone and there are far less chances of anything major happening to the baby, I’m sure I’ll never stop worrying about this kiddo (and all of our kiddos) no matter how old they get.

On a lighter note…we’ve had some fun developments this week.

On Wednesday, Kevin and I went to our prenatal appointment.  We’re always surprised with how quick they are (only about 15 minutes with the doctor, and about 5-10 minutes of getting my vitals read [blood pressure, weight, urine, etc.]) but the highlight of this visit was hearing a good 30 seconds or so of our baby’s heartbeat.  That little whoosh, whoosh, whoosh sound may be the sweetest sound we’ve ever heard.  🙂 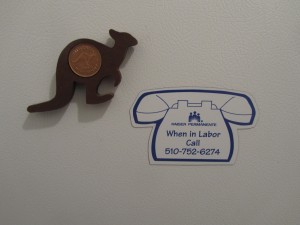 Kinda strange to have this magnet up on our fridge!  The doctor gave it to us and said that starting at week 20 we can call that line if any issues arise (as of now we can only call the nurse’s advice line).  It’s becoming more and more real as the weeks go by!

Another development is that, although I’m still not outwardly showing too much yet, I definitely feel bigger and I have a feeling this may be the last week of my “normal” jeans.  At work they were just too damn uncomfortable sitting down for hours on end so I think I may have to say goodbye for the next 6-10 months (fingers crossed).

But the BIGGEST development by far this week is that…

On Thursday, I was sitting at my computer at work and I felt a bubbly-type of feeling in my stomach.  I didn’t think much of it until it kept happening.  I stopped what I was doing and just paid close attention to what was going on and I realized, although it kind of felt like a gassy feeling, it wasn’t anything I had ever experienced before.  A lot of online pregnancy forums say that many new moms mistake the first feelings for just having gas so I was kind of anticipating that already.  And the majority of websites say that most women feel the baby between 16-20 weeks so we’re just about in the right time for it to happen.  I immediately called Kevin and told him the news and he was so excited!  The next day I felt the same type of feeling around the same time so I’m pretty darn sure that’s what’s going on in there.  All I gotta say is, keep on kicking little girl! 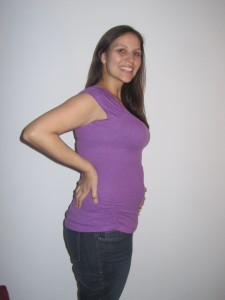 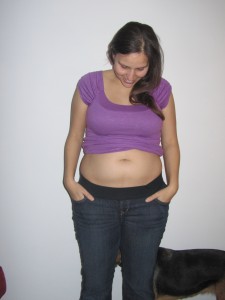 Thought I’d do a front view this week, you can start to see more of a ball shape forming on my stomach. And if you look closely you can see a faint brown line from below my belly button.  This happens to a lot of pregnant women caused by hormones and will probably disappear a few months after the baby’s born.  (And you did notice Lola in the photo again, right?)